"Prepare to be astounded!"

Zatanna is a playable character in Injustice: Gods Among Us. She is the sixth and final DLC character and costs $4.99 on the PlayStation Store or 400 Microsoft Points, and she's included, along with the other DLC characters as part of the Ultimate Edition. Her official release date was August 13th. She is a Gadget User.

Daughter of John Zatara, Zatanna is a member of the mystic tribe of sorcerers called the the Hidden Ones. Now a member of Justice League Dark, Zatanna protects the Earth from various occult threats.

Sometime before, Zatanna was contacted by Alfred Pennyworth for help in hiding the crippled Bruce Wayne from Superman and his forces. Zatanna then moved both Alfred and Bruce into the Tower of Fate, well outside of any dimension Superman would be able to reach.

In Chapter Two of Year Two, Bruce awakens and is greeted by Alfred and Zatanna, with the magician explaining where he is and assuring him he is safe. When Bruce attempts to get up, Zatanna uses her magic to put him back to sleep.

In Chapter Four, Zatanna is present along with Doctor Fate when Bruce regains consciousness just as his cellphone goes off with a call from the President. When Bruce asks if the Tower of Fate gets cellphone reception, the Doctor cryptically replies, "We are in all places and none." before walking away, with Zatanna jokingly explaining, "I think that's Doctor Fate's way of saying, "Yes, it gets cell phone reception"."

Zatanna possesses the following abilities in Injustice: Gods Among Us according to her bio in the Archives:

Intro: Zatanna's hat is seen lying on the ground, and magically floats up into the air. Zatanna comes out of the hat and says, "Prepare to be astounded!" She then throws her hat and enters her battle stance.

Outro: Zatanna does a pose and faces the camera saying "Magic is as easy as 1, 2, 3!" As she's counting down, she takes her hat off, rolls it down her arm, and then poofs away back into the hat, leaving just the hat on the ground.

Sargon's Hat Stance: Zatanna puts on her hat and takes out her wand, completely changing her fighting style. This has a limited duration and is cancelled when damage is taken or the time runs out. Also, Zatanna cannot jump, dash, crouch, or block while this is in effect but meter is built up really fast.

Avrah KaDabra: Zatanna pulls out her wand and casts a spell that surrounds her opponent in a dark blue vortex and lifts him/her into the air. Zatanna then flies up to the opponent and creates a glowing ankh, (using magical hand movement[s]), casts magical energy from the glowing ankh, then the magic energy traps him/her in a golden glowing, diamond-shaped prison. She says an enchantment, flips the prison upside down and sends it hurling toward the ground.

The defeat of Superman was a relief to Zatanna. During the Regime she and Doctor Fate had taken advantage of Superman's vulnerability to magic and turned the Tower of Fate into a sanctuary for Superman's enemies. She had saved many lives, but years of subterfuge weighed heavily upon her. After the Regime's downfall, Zatanna was instrumental in restraining meta-humans during their trials, but when a jury recommended the death penalty for the more immutable defendants, Zatanna intervened. She took the prisoners to the Tower of Fate. There they would remain-incarcerated, but alive.

Zatanna is wearing a magician coat that is black on the outside and red on the inside. Underneath she has on a white button-up shirt. Zatanna wears fishnets on her legs and also has high heel boots. Zatanna's hair is brown and she puts on her classic black hat upon activating her Character Trait. 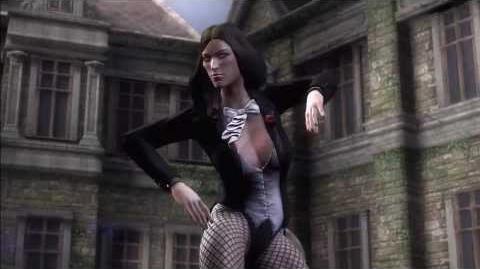 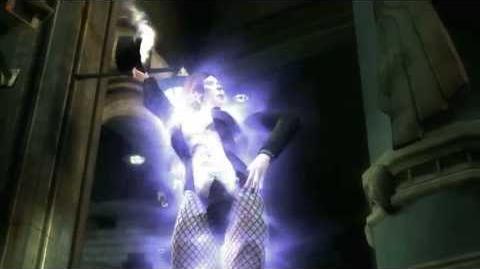 Retrieved from "https://injustice.fandom.com/wiki/Zatanna?oldid=111674"
Community content is available under CC-BY-SA unless otherwise noted.