Warrior through and through, Wonder Woman has no problem killing villains, or even other heroes, who oppose her and Superman. She believes what Superman is doing is right and justice.

An exiled sister of Themyscira, Wonder Woman remains in hiding after the fall of the Regime. Still an ardent believer of Superman and his rule, Wonder Woman awaits her opportunity to strike back against Batman and free Superman from his imprisonment.

At the start of the game, Wonder Woman is shown helping the rest of the Justice League defend Metropolis from an assault from Black Adam, Sinestro, Doomsday, and Ares. She helps Aquaman tie up Ares after the latter is defeated and is later alerted of the Joker's plan to destroy Metropolis with a nuke. As she, Hawkgirl and Shazam head towards the site, she, Batman, Green Lantern, Green Arrow, Aquaman, and the Joker are teleported to the One Earth universe.

Ending up in an alternate Gotham City, Green Lantern goes to Coast City to charge his ring, Aquaman heads to Atlantis, while Wonder Woman and Green Arrow remain in Gotham. They are eventually attacked by Sinestro and are nearly killed until Green Lantern returns. When Lantern's Regime self, Yellow Lantern, shows up, he knocks out Wonder Woman briefly before Green Lantern subdues him. As they retreat, Arrow, Lantern, and Wonder Woman come across the Insurgency Batman, who takes them to the Insurgency base, where he explains he intends to use a Kryptonite weapon to incapacitate the One Earth Superman, but he needs the displaced heroes' DNA to unlock the weapon in the Batcave.

The Regime Wonder Woman is first seen talking with the Regime leader, Superman, in the Fortress of Solitude before Yellow Lantern tells him about the displaced heroes. Later after mainstream Batman is captured, she is present when Superman realizes that this Batman is one of "the duplicates".

The mainstream Wonder Woman later helps repel a Regime invasion on the Joker Clan's hideout, Arkham Asylum. She, along with Arrow, Lantern, Aquaman, and the Insurgency Batman then head to the abandoned Wayne Manor, where Wonder Woman and Arrow fight Killer Frost and Solomon Grundy. She is frozen by Frost, but is freed by Arrow, who then defeats Frost while Lantern throws Grundy into Earth's orbit. After the Kryptonite weapon is recovered in the Batcave, Wonder Woman's counterpart, as well as One Earth Black Adam, arrive. Green Arrow manages to subdue her counterpart, but mainstream Wonder Woman is knocked out by Black Adam, along with Lantern, Aquaman, and Batman. After Adam is defeated, Batman discovers that the weapon is damaged beyond repair, though the Kryptonite is intact.

Wonder Woman takes part in the invasion of Stryker's Island to rescue the mainstream Batman, but during the fight, she is choked unconscious by One Earth Superman.

After Lex Luthor is killed, the Regime Wonder Woman discusses the displaced heroes with Sinestro, Black Adam, Cyborg, Raven, and Superman, the latter of which decides to destroy Metropolis and Gotham to demonstrate the chaos that would arise in his absence. She also witnesses One Earth Shazam's murder by Superman, who then orders her to rally her Amazonian army to attack Metropolis.

When One Earth Flash informs the Insurgents of Superman's plan, One Earth Batman elects to send the displaced heroes home and rejects mainstream Batman's offer to bring over the mainstream Superman. Wonder Woman is against One Earth Batman's motives, not wanting to dishonor Lex Luthor's sacrifice. When the Regime attacks the Insurgency HQ, Wonder Woman defeats Bane before Ares transports her to Themyscara, where he reveals her counterparts intentions. After defeating One Earth Raven, Wonder Woman confronts her counterpart and tries to knock sense into her, but her counterpart refuses to listen. They fight, with it being proven that they are equals in ability. Ultimately victorious in the fight, however, Wonder Woman convinces the alternate Amazons (whom she addresses as her sisters) to return to their previous roles as protectors instead of conquerors, leading them in the defense of Metropolis.

In the epilogue, Wonder Woman watches on as her counterpart is taken away by her fellow Amazons.

She appears in the flashback scene and is seen at Arkham Asylum when she encounters Bruce. She asks if he’s here to help, only for him to respond that he’s stopping them from making a mistake. She tells him that Joker forced their hands and they must change with Metropolis. She angrily tells Bruce that she thought he would have understand of all people before fighting him and being defeated. Bruce uses Diana’s lasso Against her and demands to know Superman’s whereabouts. She tells him that he can’t turn his back on Superman and that he needs Bruce.

In present day, she is currently hidden in Kahndaq, along with Black Adam since she's been exiled from Themyscira and disowned by her once-beloved sisters (due to her prime counterpart successfully convincing them to turn away from the corrupting influence of the One Earth Regime).

She is watching the destruction Braniac is causing and assists Kara and Black Adam to free Superman.

With Brainiac invading Earth, they set off to Stryker's Island to free Kal and his allies.

After being beaten by Batman alongside Superman, The Regime has permanently fallen apart, with Black Adam being persecuted and Superman being imprisoned in the Phantom Zone. An intro between Green Lantern and Cheetah reveal that she was sent to Oa to stand trial.

The daughter of the Olympian god Zeus and the Amazon Queen Hippolyta, Wonder Woman is one of the most powerful demigods alive, boasting superhuman strength (able to overpower Superman), senses, durability, healing, stamina, agility, reflexes and speed (faster than Superman, but not as fast as the Flash), with Diana also possessing the power of flight and godlike longevity due to her status as a demigod. When Wonder Woman combines her natural powers with the skills and training she received from her time raised among the Amazons of Themyscira, her skills allow her to overcome opponents even more powerful than herself, as seen when she defeated Superman in a one on one fight.

Aside from her natural abilities, Diana retains several magically forged weapons, both offensive and defensive, most forged by the smith god Hephaestus. Diana's tiara more than signifies her royal status, and can act as a projectile weapon similar to a boomerang, while her gauntlets allow her to deflect bullets and other weaponry. For primary offense, Diana prefers her sword and shield, with her sword powerful enough to cut Superman and Captain Atom, her shield indestructible to any attack. Wonder Woman's most famous weapon is her Lasso of Truth, a magical sewn golden rope that compels anyone touching it to tell the truth. Diana uses the lasso to bind and reel her opponents in, and can even use its truth speaking capabilities offensively, having depowered Black Adam himself when she compelled him to speak his magic word.

Though powerful, Diana is still not completely invulnerable. She is more vulnerable than Superman and she can be severely harmed by attacks that ordinarily would not cause any harm to the Man of Steel, as seen when she was left in a coma after being caught in Captain Atom's detonation.

Style Change: Wonder Woman's character trait is the ability to switch weapons from a Sword and Shield to the Lasso of Truth.

Wonder Woman returned home to find her dimension in ruins. Aware of Superman's despotic rule of the parallel dimension, the gods of Olympus vowed to preemptively eliminate the meta-human scourge from their world. Under the direction of Zeus, they hunted down and eliminated nearly all super-powered mortals. All that remained to oppose them was Themyscira. Wonder Woman and her Amazons fought back against the Olympians with unrelenting courage. Despite heavy losses, Wonder Woman's forces ultimately prevailed. They took reign as the New Olympians, ushering in an age of peace and prosperity.

When Batman tore down the Regime, man's world called me a tyrant. My Amazon sisters disowned me. Then Brainiac showed Earth what a tyrant truly looks like. The people begged for deliverance -- and I gave them Brainiac's head. Once again, it falls upon the Regime to restore peace and order. Batman and the traitors who followed him will be punished. Even Kara Zor-El. Then I will return to Themyscira -- and deal with my sisters. If they do not heed my commands, they will bow to force. So says Diana, Princess of the Amazons, slayer of Brainiac!

Wonder Woman wears a strapless red bustier held up by a brace of gold resembling an eagle with a star. She has a gold belt with a star on it and blue briefs with white stars on the side. She has blue pants and red boots with white stripes on the front that turn into wings at the top. She also wears her silver bracelets of submission on her wrists, her golden tiara with a red star on her forehead, her golden lasso which hangs from her belt when not used, and her sword and shield which stay on her back when not in use.

Wonder Woman retains her sword, shield, and lasso. She has a red one-piece leotard held up by a modified brace of gold resembling a headless eagle's wings. She has a large golden belt that also resembles an eagle. She sports a golden Amazonian helmet instead of her tiara, and golden armor on her shoulders and arms, which replace her traditional bracelets of submission with golden ones. She also has knee-high greaves with white stripes that go up to her shins. 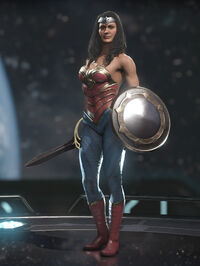 To the right is the base skin for Wonder Woman, Amazon Warrior. She is wearing her default gear. The remainder of her costumes can be found on her gallery page.