Injustice:Gods Among Us Wiki
Register
Don't have an account?
Sign In
in: Villains, Batman Villains, Males,
and 7 more

Victor Zsasz was a psychopathic enemy of the Batman. Zsasz delights in murdering random victims and mutilating his own flesh with several tally marks to keep score.

Victor Zsasz had amassed a large personal fortune in addition to his family's wealth. One night, he ended up in the Penguin's casino, where he gambled everything he owned and ended up losing it all; afterwards he saw that his life was empty, driven by desire, and there was no point to living. While he was attempting to commit suicide by jumping from Gotham Bridge, a homeless man tried to assault him with a knife. Instinctively grabbing the knife, Zsasz saw in the man's eyes that all life is meaningless and that nothing nor anyone matters. He then proceeded to stab the man to death as a "gift" for saving his life. From then on, he dedicated himself to "liberating" others from their pointless existence

When the Justice League go to Arkham to round up the insane inmates and move them to a more secure location, Zsasz interrupts an argument between Superman and Batman, taunting Superman and asking him if he felt the 'release' from taking a life. Wonder Woman then has Cyborg open Zsasz's cell door, much to Batman's horror and Zsasz's delight, only for the insane killer to be quickly swept away by the Flash to the secure location Superman has created for the Arkham patients.

Alfred Pennyworth preparing for his birthday was informed of an intruder in the Batcave when he sees Victor Zsasz asking about Batman's whereabouts. Alfred evades his question and Victor claiming he is hoping he would say that before the two engages in a fight.

At first Alfred managed to put up a good fight until Zsasz slashes his left elbow and his right knee. Zsasz demands to call Batman on the Batcomputer and Alfred refuses before asking him who sends him. Victor answers "the devil" before stabbing him in the stomach, killing him.

Zsasz knowing that Batman would be finding him after Alfred's death gets into a sewer then into a parking garage to steal a car until the Batmobile runs over his car. Zsasz attempts to flee into an alley but Batman cripples him with his Batarang. A furious Batman beats Zsasz, demanding who sends him. Zsasz answers if that's the only thing he wanted to know, and Batman answers "yes!" lands an another punch to his face. Damian stands before them and tells his father to kill him or he will. Batman reluctantly tells him if he wanted to kill Zsasz, before Damian tells "the real question father is why don't you?".

While Batman engages against Wonder Woman and Hal Jordan after he beats Superman via by taking the 5-U-93-R pill, Zsasz later asks if he can kill Batman before Damian knocks him out.

Later, Zsasz is found beaten to death in the Regime's prison. With the security camera disabled, it was actually Damian who killed him while demanding which cut was from Alfred, avenging his death.

Zsasz makes a cameo in the first chapter of the story, being taken hostage by Damian Wayne and killed as a way of Damian stating he agrees with Superman. Before he gets killed he tells Damian he killed 121 women.

Zsasz is a master escape artist, breaking out of every prison that has ever held him. He is also a skilled hand-to-hand combatant, particularly in using knives.

Zsasz is a tall muscular bald man covered in tally marks, each mark representing a life he has taken. He rarely wears a shirt or shoes, and is only seen in the pants of an Arkham Asylum patient clothes. 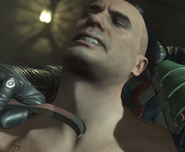 Zsasz about to be executed by Robin in Injustice 2.
Community content is available under CC-BY-SA unless otherwise noted.