Daniel Turpin is the warden of Lex Luthor Prison for Meta-Humans, hand-selected by Batman following the fall of Superman's Regime.

Dan Turpin informed Batman and his group about the power-out in the prison.

He later on was informed by one of his men that Batman was coming in. Unknown to him, it was the other Batman who killed the man who told Dan Turpin.

Turpin was killed by Athanasia Al Ghul during the breakout of Damian Wayne. 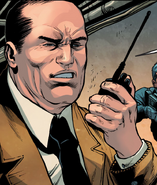 Add a photo to this gallery
Retrieved from "https://injustice.fandom.com/wiki/Turpin?oldid=144218"
Community content is available under CC-BY-SA unless otherwise noted.