This article is a stub. You can help Injustice:Gods Among Us Wiki by expanding it. 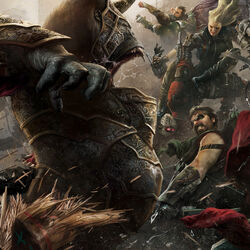 The Society is a group of supervillains led by Gorilla Grodd in an attempt to dominate the Earth after the destruction of the Regime.

Gorilla Grodd founded the Society sometime after the dissolution of High Councillor Superman's One Earth Regime in an attempt to fill the power vacuum left in the wake of the High Councillor's defeat. To this end, he recruited those with similar desires for power, those who desired revenge on the Regime itself, and evenly forcibly recruited some to his cause.

At the end of the story however, all members, save for Grodd, leave the organization after realizing that Brainiac had plans to destroy Earth entirely, instead of conquering it.

Community content is available under CC-BY-SA unless otherwise noted.