Injustice:Gods Among Us Wiki
Register
Don't have an account?
Sign In
Advertisement
in: Heroes, Males, Justice League Members,
and 7 more

The Atom appears as a playable DLC character in Injustice 2 (2017).

Ray Palmer's incarnation of The Atom appears in the background of a Injustice: Gods Among Us stage. He is seen near a computer. He is also playable in a S.T.A.R. Labs mission.

Ray's protégé, Ryan Choi, appears as The Atom in the sequel of Injustice 2, as DLC and the first character in Fighter Pack 3. He appears with an updated, armored suit.

Physics prodigy Ryan Choi took on the mantle of the Atom when his mentor — and the second Atom —Ray Palmer mysteriously disappeared. Now armed with quantum shrinking technology, Ryan will use the subatomic power of the quantum bio-belt to seek out his lost friend and further the fight for justice.

Brainiac's armor made him impervious to harm, from the outside, at least. He'll survive this minor brain surgery. He just won't be able to control his Skull Ship anymore. Crisis averted, I can get back to searching for my missing mentor, Professor Ray Palmer. Last year, Palmer dove headfirst into the Microverse, a subatomic dimension he himself discovered. In case he got lost, he left behind a trail of clues and designated an asthmatic research fellow, yours truly, to follow them. That trail's gone cold. Which is why I'm upgrading my bio-belt with Brainiac's technology. It's my turn to get subatomic. I'm not the strongest or bravest hero out there. But Professor Palmer? He's an Einstein-level genius. He trusted me with his astonishing legacy. The Atom is not going to let him down. 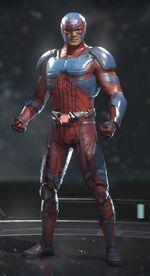 The Atom wears a full-body suit divided between red and blue, with blue consisting of the chest area, while red covers the legs and waist, the gloves red as well while his boots and mask are blue.

To your right is Atom's skin, Rebirth. He is wearing his default gear. The remainder of his costumes can be found on his gallery page.