Injustice:Gods Among Us Wiki
Register
Don't have an account?
Sign In
Advertisement
in: Males, Metahumans, Heroes,
and 7 more

Swamp Thing is a plant elemental and protector of the Earth. He is a playable character in Injustice 2 (2017) and a featured character in the Year Three comic series.

Dr. Alec Holland was a brilliant chemist and botanist who created a formula to stimulate hormonal growth in plant life. When Alec was working in his lab in Louisiana, he was killed by terrorists, and after he died his body was exposed to the formula, and Alec was resurrected as a living elemental known as Swamp Thing, protector of the Green.

Swamp Thing first appears in his giant form, enraged that the battle between the Society and Batman's team (consisting of Green Arrow, Black Canary, and Harley Quinn) was destroying the swamp. Harley questions his appearance, believing that he had died when he was sent to hell. Swamp Thing explains that as the guardian of the Green, he can always reincarnate by using a plant as a vessel for his consciousness, essentially making him immortal as long as the Green lives. He proceeds to knock Black Canary and Green Arrow, though Harley dodged his attack. Harley attempts to reason with Swamp Thing, but he isn't interested and attacks her, only to be defeated. After Harley finally manages to convince Swamp Thing it is the Society that is the true threat to the swamp, Swamp Thing, proceeds to attack several of Scarecrow's men and even defend Green Arrow, Black Canary, and Harley Quinn from gunfire. Harley then offers Swamp Thing a chance to help Batman, though he rejects. However, before leaving, he states that should their interests align, he will consider aiding Batman.

He is later seen brainwashed by Brainiac and attacking Batman and Superman with the aid of a brainwashed Firestorm. When either Batman or Superman why Swamp Thing would be against the Green, Brainiac, via Swamp Thing, explains that the Green will survive on board his ship as a digital copy, preserving it forever. He is defeated by them, and Batman manages to free him and Firestorm.

Being the Avatar of the Green, Swamp Thing has complete control over the plant life that surrounds him. He is a user of chlorokinesis; as such, he can affect plant growth and make all types of plant life do his bidding. His body is composed of plant-based stem cells, allowing him to morph into any living type of plant and grow wooden branches, vines, and logs out of his framework. He also has the ability to enlarge himself and his limbs exponentially, making himself gargantuan-sized.

However, being connected to all plant life on Earth, Swamp Thing is also effectively immortal; any amount of plant life on the planet serves as a vessel for Swamp Thing's conscience. Swamp Thing's strength level is directly connected to plant life and Earth, to which he can contain that strength within his body. As such, he can lift large weights of mass much heavier than his original body weight. He also uses his wings, consisting of plant material, which gives him the ability to fly. Swamp Thing, however, does have weaknesses to fire and to poison, as he is an Avatar of the Green. Swamp Thing is also an intelligent chemist and botanist, and when he was Alec Holland, he created the Bio-Restorative Formula, which was designed to stimulate hormonal growth in plant life, enabling plants to grow in hostile terrain.

Many throughout history have underestimated the Green. In this way, Brainiac was no different than Superman or Batman. They all thought they could improve upon nature. They all were wrong. Earth belonged to the Green for eons before animals evolved. Now, the trees and plants will remind these animals upon whose planet they reside. When the next crisis comes, nature will protect itself. I stand with the Green, and the Green alone. 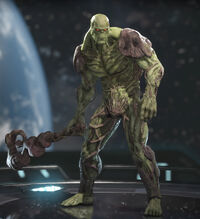 Swamp Thing is a large humanoid being completely composed of green plant matter, swamp moss. He lacks a nose and has blazing red eyes.

To the right is the base skin for Swamp Thing, Guardian of the Green. He is wearing his default gear. The remainder of his costumes can be found on his gallery page.