watch 01:11
Injustice 2: Supergirl's Special Moves and Supermove
Do you like this video?
Play Sound

Supergirl is the overall tritagonist of the Injustice series. She is the deuteragonist of Injustice 2, and she will appear as one of the main protagonists of Injustice 3.

As a child, Kara Zor-El witnessed the devastation of Krypton before she was sent to Earth on a mission to protect her infant cousin, Kal-El. Arriving on Earth decades too late, she discovered that grown-up Kal has been imprisoned, due to his hideous actions as the High Councillor of Regime over the last five years. Still determined to protect her family, and its legacy, Kara will fight her cousin’s enemies as Supergirl.

Before the destruction of her home planet, Kara was there during the events involving the invasion of the Coluan named Brainiac. She evaded capture with the aid of her mother, Alura In-Ze. Alura would send Kara to Earth in hopes of teaching her younger cousin Kal-El. Launching in a rocket, Kara would be flung off course, caused by Krypton's destruction. This resulted in her entering hypersleep for the next 30 years, while Kal-El arrived on Earth. Sometime after that, Black Adam had found her ship and brought it to Kahndaq. Later, Kara and Black Adam rescued an imprisoned Wonder Woman from Themyscira.

While within the safety of the mystical city, Kara would find herself told not to make her presence known by Wonder Woman or Black Adam, as they planned on breaking Superman from his prison cell. Despite this, she was more rebellious and wished to explore her newfound powers while on Earth, and use them to help the people. Kara also shows no fear for Batman, but remains frustrated that she is unable to use her powers to help Kal-El.

Later, Kara watches Wonder Woman and Black Adam observing Brainiac's invasion in a magic crystal. Kara recognizes the ship, and begins to panic, which is noticed by Wonder Woman. When she asks who the invader is, Kara only states that they need to get Kal-El immediately.

Kara is part of Black Adam and Wonder Woman's rescue attempt at Stryker's Island. While the two run interference with the prison guards, Kara frees Cyborg and Damian, and gives his gear to the latter.

When Superman questions Cyborg over his rescuer, Kara affirms it, and meets her cousin for the first time. He immediately recognizes her, and is visibly shocked over the survival of another Kryptonian. Kara asks how Kal recognized her, and Superman reveals that his parents stored an image of her on his ship, and knows her role as his protector. Kara apologizes for being "a few decades late," and explains the reasons for her absence. When Kal expresses his doubts of never seeing another Kryptonian, she tells him that his parents loved him so much. When the facility begins to shake, Kara asks Cyborg how long until Superman is free, which he states five minutes, and goes to help Wonder Woman.

Eventually, Kara returns and restrains Firestorm and warns him to stay away from Kal. However, Firestorm begins to summon kryptonite-fueled fire, which begins to weaken Kara. She gasps out that Firestorm is just as bad as Wonder Woman and Black Adam had said. Firestorm offers to stop, but only if she surrenders. Kara then declares that "Kryptonians never surrender," and proceeds to punch him, stopping him from weakening her any further. She then declares that they are freeing Kal-El, and fights Blue Beetle or Firestorm, depending on the player, but is defeated.

Later, Kara recovers enough to stand with the other Regime members against Blue Beetle and Firestorm. She is later present when Firestorm begins to gather enough energy to destroy the facility, as well as Batman's intervention. She later stands in the way of Batman, and calls herself "Superman's overprotective cousin," when Batman questions her identity. Kara was present as the heroes made plans to repel Brainiac's invasion, providing insight into what had happened from her experience on Krypton. Later, she and Diana would fight his forces in Metropolis, though Kara saw civilians cowering at their presence.

After being incapacitated by Cheetah, Kara was saved by Diana, who almost killed Minerva. When Harley Quinn intervened, Diana stabbed her through the torso, causing Kara to realize the Amazonian's true colors. After sealing Quinn's wounds with her heat vision, she battled and defeated Diana and went to speak to Superman in the Fortress of Solitude. Upon confronting him on Diana's actions, Kara learnt the truth about her cousin's fall from grace and his murder of the Joker, along with many other criminals and former allies. Disgusted, she tried to leave, battling and defeating both Nightwing and Black Adam. She is later seen at the desolate city. She slaps Diana in the shoulder, telling her that millions of people are aboard Brainiac's ship that that they've got to save them. After Brainiac tells them about his plan, Kara concedes to going to Brainiac but Batman refuses, saying that they have to shut down the shields. With Batman's help she gets aboard the ship. She sees the captured (remaining) Kryptonians in Brainiac's collection, pleading to Batman that they have to help them.

Should the player choose Batman, the ending results in a battle following the defeat of Brainiac and ultimately leads to the defeat of Superman and his allies. As a result, Superman is placed in the Phantom Zone. Batman begins to trust Kara as a result, and offers her a position in the Justice League.

Should the player choose Superman, a battle ensues following the defeat of Brainiac, eventually leading to the defeat of Batman and his allies. Superman confronts Kara in hopes of getting her on his side, but after her refusal and defeat, she is captured and placed in the same red sun cell her cousin was in prior. She is to remain there until she accepts Superman's offer. She shows visible shock when she learns that Superman has killed Brainiac and bonded with his ship, and is absolutely horrified at Batman's forced conversion to Superman's side.

Kara is extremely powerful but unlike Superman, she doesn't want to use her power to terrorize others. Although she is basically raised by the evil Regime Wonder Woman and taught that Batman is evil, Kara knows her own mind and morals and is horrified when she realized that her cousin is a mass murdering monster on a planet wide scale. Thanks to her strong will and incorruptible morals, Kara rejects Superman and Wonder Woman's insanity and sides with Batman, hoping that she can restore the people's faith in superheroes. She sadly notes to Batman that the symbol on her and Superman's costumes is meant to bring hope, but her evil cousin had instead made people fear it. Kara still cares for Superman but when reasoning with him doesn't work, she realizes he has fallen too far to be saved.

Kara cares more about the well-being of others than her own safety and is willing to sacrifice herself to Brainiac if it means he will spare the Earth. She is grateful when Batman protectively steps between her and Brainiac and grows to trust him, despite being told that he's a villain ever since she arrived on Earth. Kara is also willing to give people second chances and is implied to have become close to Harley Quinn, smiling at her jokes during the meeting to discuss how to defeat Brainiac and defending her from Wonder Woman, insisting that even if she deserves to die, she is defenseless and has been given no trial. Having been taught by Wonder Woman herself that heroes fight with honor, Kara realizes that her hypocritical former mentor doesn't follow her own advice because she has lost all her honor. Upset that Wonder Woman has betrayed her trust, Kara defeats her and takes the wounded Harley away to be treated.

When not weighed down by her responsibilities and the betrayal of people she trusted, Kara shows a more childish side, grinning at Harley's immaturity, flying around the Earth in her free time just to enjoy the sounds and view, and feeling cooped up by Wonder Woman and Black Adam. Although well meaning, she is also naive at first but matures throughout the game by realizing that her mentors are using her for their own selfish needs. Kara also shows fear at several points during the game, including when she learns Superman's true nature and when she is bound by Braniac's kryptonite powered shackles. However, fear doesn't overpower her incorruptible morals and she even compares Superman to the evil General Zod when she realizes what a monster he has become. Kara is sweet, kind, selfless and strongly devoted to maintaining peace and protecting people who can't protect themselves, even if she has to defend them from her own friends and family. She prefers not to use violence but due to the massive power she wields, she can still be a devastating opponent in battle.

Born on the planet Krypton, before Brainiac's invasion and the planet's destruction, Kara had no special powers under the effects of the natural red sun. When she was found however and brought to Earth, she had found herself absorbing the effects of its yellow sun. As a result, she gained abilities, like her cousin before her. Kara's dense molecular structure and bio-electric aura give her the ability to withstand damage that would normally kill a human being. This also extends to bullets, lasers and even the effects of space. Like her cousin, she can also move at speeds, exceeding the world's fastest fighter jets and apply the same speed to reach the sun within seconds. Kara's dense structure also gives her the ability to lift and punch things made of metals and even inflict serious injury to beings of lower or equal strength.

Since Krypton's gravity was far greater, Kara's body gives her the ability to propel herself into the air, allowing her to fly anywhere in the world. Should her body also receive injury, while on Earth, her body can heal injuries within mere seconds. Her other abilities also include the ability to take in larger quantities of air and expel it with hurricane-force winds and even produce the same kind of force when freezing. Another power she has is the ability to intake solar energy and dispense red beams of intense heat from her eyes, which can cauterize wounds, melt metals and even blast holes through concrete.

Despite having gained the same abilities as her cousin did on planet Earth, Kara is not invincible. Like her cousin, Kara is susceptible to the effects of kryptonite, which weakens her in a painful manner and will kill her after prolonged exposure. Magic is also another Achilles' Heel for Kara, as the Kryptonian dense molecular structure and bio-electric aura cannot naturally defend her against it.

My hands still shake when I remember Brainiac's "collection" of Krypton. I want to give the world he stole a second chance. But bonding with Brainiac's ship is too risky. I need a safer way to restore our cities. I'm so glad for the Justice League's help. Barry, Professor Stein--they've already taught me so much. Every day we get closer to reversing Brainiac's collection process. When we do, we'll pick the right star system. What Brainiac ruined will be reborn--Argo City and Kandor, twin cities, survivors. I couldn't save Kal-El. But I will save our people. 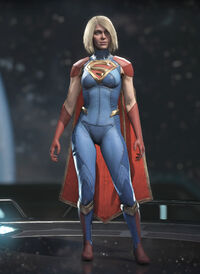 To the right is the base skin for Supergirl, Girl of Steel. She is wearing her default gear. The remainder of her costumes can be found on her gallery page.

Retrieved from "https://injustice.fandom.com/wiki/Supergirl?oldid=149150"
Community content is available under CC-BY-SA unless otherwise noted.