Start a Wiki
watch 01:55
Introducing Sub-Zero!
Do you like this video?

Kuai Liang, better known as, Sub-Zero, a ninja from the Mortal Kombat franchise, initially appears in a non-playable cameo in Injustice: Gods Among Us, before reappearing as a playable guest character in Injustice 2.

Sub-Zero was the third DLC character released and the second character available as part of Fighter Pack 1.

Sub-Zero is a lethal cryomancer and leader of the reformed Lin Kuei clan. When Sub-Zero was younger, the Lin Kuei were corrupted and destroyed from within, staining their honor. Now serving as Grandmaster, Sub-Zero vows to redeem that honor, pledging to defend the realm from threats near, far, and beyond. In the intergalactic menace Brainiac, Sub-Zero sees a threat to all worlds, and perhaps his greatest opportunity for redemption yet.

Sub-Zero appears as a cameo in Scorpion's battle intro: having lost the fight, he's about to be finished by his nemesis, before the wraith suddenly disappears.

Sub-Zero is a downloadable guest character for Injustice 2. He was the second available fighter as part of Fighter Pack 1.

As one of the few known descendants of a near-extinct race known as Cryomancers, Sub-Zero possesses the magical ability to control ice. Throughout his life, this power has been honed to perfection. He can flash-freeze enemies within a few seconds, and is capable of conjuring an ice sculpture of himself to act as a layer of defense. By freezing water vapor, he is also able to form highly intricate weapons for use in combat, such as swords, daggers or hammers. His body can even turn into ice and vice versa, allowing him to teleport. As the Grandmaster of the Lin Kuei assassin clan, Sub-Zero is well versed in the various styles of hand-to-hand combat, and extensively utilizes his cryokinetic powers alongside his martial arts skill during fights.

I arrived in this realm accidentally, driven here by magic unleashed as I forced Kotal Kahn's retreat from Earthrealm to Outworld. I was seeking a route home when Brainiac attacked. I could not allow this vile invader to add this planet, or myself, to his collection. In gratitude for my flawless victory, Batman offered the Justice League's aid. While I waited on him to unlock the magic of inter-realm travel, I provided valuable kombat training to the youngest members of his order. But the spells that were devised went awry. Instead of opening a portal to Earthrealm, they opened a gateway to the Phantom Zone. Now I fight to re-imprison Superman and his followers. They would not have been freed, but for my accidental arrival in this realm. I am now duty-bound to protect it, as if it were my own. 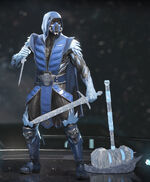 To the right is Sub-Zero's base skin, Grandmaster Kuai Liang. He is wearing his default gear. The remainder of his costumes can be found on his gallery page.

Retrieved from "https://injustice.fandom.com/wiki/Sub-Zero?oldid=146805"
Community content is available under CC-BY-SA unless otherwise noted.