Natasha Irons is the niece of the original Steel who take the mantle of Steel after his death.

She first appear among the billionaires that try to change the world with president and she witness on Tv the death of Blue Beetle with others who destroy nature.

Later she is ordered with Aqualad by Batman to protect the president. She later talk with Aqualad about the fact that she blame the Joker for metropolis. She fly near the president seaching for suspect behaviour until Aqualad ask her to get hight into the sky and she witness his betrayal when he create a wave that kill everyone. 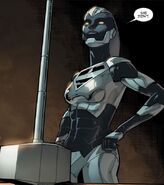 Add a photo to this gallery
Retrieved from "https://injustice.fandom.com/wiki/Steel?oldid=144244"
Community content is available under CC-BY-SA unless otherwise noted.