Start a Wiki
watch 01:38
'Injustice 2' - Introducing Starfire!
Do you like this video?

Starfire is a Teen Titan and appears in the Year Three Annual of the Injustice: Gods Among Us Comic, and as a DLC playable character in Injustice 2.

As the next Queen of Tamaran, Princess Koriand’r found herself the victim of her fratricidal sister's vengeful plot that resulted in their planet being conquered. Now a royal exile on Earth, Koriand’r uses her ability to absorb and convert ultraviolet energy as Starfire.

Starfire appears as a DLC character.

Tamaranean Charge: Starfire flies toward the opponent, hitting them with her blazing hair. Meter burn does additional damage and hits her opponent a second time. She can also do this in the air.

Burning Desire: Starfire hits the opponent with a strike of her burning hair, staggering them. Meter burning adds a second hit that hits them overhead

Star Dust: Starfire throws 3 star projectiles that hit the opponent. This has three versions, close, far, very far. Meter Burn will turn it into an energy orb that allows her to extend her combos. ( If you use starbolt after doing meter burn star dust, it triggers an explosion.)

Shooting Star: Starfire hits the opponent three times with her hands, projecting energy from them in the form of beams, Meter burning does additional damage.

Floating Princess: Starfire gains the power to hover above the ground and slowly float back to the ground (Ability)

Throw: Starfire grabs the opponent, uppercuts them into the air and while they're still in the air, she flies to them and punches them to the ground with an energy filled punch.

Tamaranean Gift: Starfire’s trait allows her to access her signature starbolts that will extend her combos

Starbolt: Starfire releases a straight blast of energy at the opponent, this can be extended up to 4 hits. She can do this in the air and meter burning hits crouching opponents and deals additional damage

Back in the day, this victory would have called for a party at Titans Tower. The music. The laughter. The mustard with pizza on bottom. But these days, I have no party mates.

Raven became a servant of Trigon. Cyborg? He joined the Regime. Beast Boy has been missing so long, I must assume he is dead. Dick Grayson... He was my star-crossed soulmate. He will never be replaced. And now, all that's left is me. Last of the Titans.

Dick would not approve of the moping. I only overcame the loss of Tamaran by coming to Earth and forging new bonds of friendship with the Titans. It is incumbent upon to repeat history. To forge new bonds of friendship. Maybe they're not MY Titans, but the only way I know to honor my lost friends is to make sure that no matter what, there will always be Titans together. After all, I beat Brainiac. That was a victory. And victories call for mustard parties. 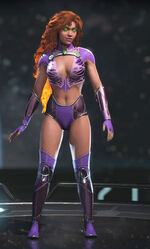 To the right is the base skin for Starfire, Kory Anders. She is wearing her default gear. The remainder of her costumes can be found on her gallery page.

Retrieved from "https://injustice.fandom.com/wiki/Starfire?oldid=147250"
Community content is available under CC-BY-SA unless otherwise noted.