Injustice:Gods Among Us Wiki
Register
Don't have an account?
Sign In
Advertisement
in: Villains, Males, Humans,
and 15 more

View source
watch 01:43
'Injustice 2' - Introducing Scarecrow!
Do you like this video?
Play Sound

Injustice: Gods Among Us (cameo)
Injustice 2

Scarecrow plays on the fears of the unknown to inflict terror on his victims. An anarchist obsessed with using chemistry and psychology to spread and study fear. He joins the Society to sow panic on a global scale.

Scarecrow's appearance in this game is heavily inspired by his Batman: Arkham Asylum (2009) appearance: he wears raggedy brown garbs over his chest and stitched brown pants, a hangman's noose over his neck, with his mask having both a hood over it and needle-like stitching in it, with gas filters on both sides of his mouth. On his right hand, he wears a customized glove with several syringes attached to them connected to a tube filled with his fear toxin.

Scarecrow's appearance in this game is vastly different: his normal appearance appears to have been inspired by his appearance in the Dark Knight Trilogy, in that he wears a white lab coat over a formal suit, a burlap bag (that features three gas filters, one on each side of his jaw, and a third in the middle, over his mouth, as well as a pair of telescope-like lenses over his eyes) over his face and a loose hangman's noose around his neck; his in-game playable appearance is far more terrifying due to the effects of his Fear Toxin: he takes an appearance of a tall, nightmarish creature, with features resembling those of a scarecrow and a skeletal corpse, his eyes and mouth glow bright orange, and in-game, he fights with a chained hook-like sickle.

To the right is the base skin for Scarecrow, Fear Gas. He is wearing his default gear. The remainder of his costumes can be found on his gallery page.

During Year 1, the Joker had kidnapped Scarecrow and brought him to Metropolis to develop his fear toxin for Joker's scheme. Joker then subjected Crane to his own Joker gas, seemingly killing him. His body was later found by Flash at the city docks, which he showed to Batman.

During Year 5, Scarecrow and several other members of Batman's rogues gallery battle Robin.

Scarecrow appears in the Arkham Asylum stage as a transition hazard appearing in cell A8. He injects the player/opponent with his Fear Toxin, takes on a massive appearance, beats up the player/opponent before sending him/her into the Asylum Kitchen/Theatre.

Scarecrow also appears in one of the S.T.A.R. Labs Missions belonging to Batman. He escapes Arkham Asylum and later takes control of Raven and gets her to fight Batman. As well as in the background of Nightwing's S.T.A.R. Labs Mission, Look Out, where he is tied up, struggling to get out.

Scarecrow is seen in the first scene in the swamp as a member of Grodd's society, transporting his Fear Gas to an unknown location. Deadshot becomes impatient over the process, though Scarecrow assures him that the gas will be delivered by tomorrow. When Poison Ivy captures a spying Green Arrow, Black Canary, and Harley Quinn. He sends Deadshot away and goes over to investigate. When Poison Ivy finishes explaining her motives in joining the Society, the trio of heroes escape via knife Harley had, and Harley battles Ivy while Black Canary and Green Arrow take on Scarecrow. While Harley emerges victorious, Scarecrow had managed to subdue Green Arrow and Black Canary with his fear gas. He attempts to dose Harley with some of the gas before Harley mocks the attempt, claiming she used to sniff the gas for fun. This hardly fazes Scarecrow, claiming that he had a new and upgraded batch of Fear Toxin, and upon giving Harley a second dose, Harley envisions Scarecrow in his monstrous form. Scarecrow compliments her high tolerance before engaging in a fight with her, with Harley emerging victorious. Upon his defeat, he gases Harley again, so she sees the Joker, but he is defeated, breaking the illusion. He is then seen escaping the swamp on a boat from Swamp Thing.

He is later seen gassing Wonder Woman, so she envisions Superman attacking her, stating she corrupted him and manipulated his grief. Wonder Woman manages to break the illusion by stabbing the illusion of Superman before Scarecrow shows himself and gives her another dose to once again appear in his monstrous form. He is defeated by her, and he tries in a last-ditch effort to give her another dose before Wonder Woman slashes his wrist, finally bringing him into submission. Wonder Woman presumably leaves him behind to save Supergirl from Cheetah.

Along with the other members of the Society, he disbands once he learns that Brainiac will destroy the Earth rather than let them conquer it.

Scarecrow is a master of intimidation and fear induction, using his own appearance, knowledge of psychology, and chemical creations to inspire terror in his victims, letting their own fears cripple and destroy them.

In his exaggerated monster form, Scarecrow uses a customized flail-type sickle to attack his opponents, grabbing them and pulling them towards him. The sickle is extremely long-ranged, reaching his opponent from afar. In this form, he also has fear powers of his own, as he can generate his specialized Fear Toxin, shooting it out of his mouth and from his hands. 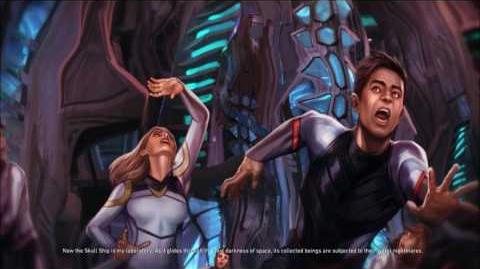 After studying Brainiac's blood, I tweaked my fear toxin to exploit his alien biology. And as I gained control of his shattered mind, I also gained control of his ship. I began to explore Brainiac's enormous collection, soon realizing it was an unprecedented opportunity for study. Billions of species, from millions of worlds. Each with its own phobias and fears. Now, the Skull Ship is my laboratory. As it glides through the vast darkness of space, its collected beings are subjected to their worst nightmares. With each I study, my knowledge grows. It may take decades, but I will become the universe's greatest master of fear.