Injustice:Gods Among Us Wiki
Register
Don't have an account?
Sign In
Advertisement
in: Regime Member, Heroes, Males,
and 12 more

This is the article for Damian Wayne, you may be looking for Dick Grayson

Damian Wayne as Nightwing is a playable character, as the Regime Costume for Nightwing in Injustice: Gods Among Us (2013). He is classified as a Gadget User. He is an agile fighter and can combine his dual sticks into a large staff. He is a major antagonist in Injustice: Gods Among Us and Injustice 2 (2017), the latter game in which he serves as an ally until a specific point in the game.

In the prequel comic, he is still known as Robin, up until the Year Five series. It is in this form that he appears as a playable character in Injustice 2. He is a member of the Regime and an ally-turned-enemy of his father Batman.

Injustice 2 (as Robin and Nightwing)

Raised from birth by the League of Assassins, Damian Wayne has always struggled with Batman’s non-lethal code of honor. Now in direct opposition to his father, Damian seeks a new mentor in Superman—whom he considers to be more of a father than Batman ever was.

In the five years between Superman's rise to power and the events of the main game, Damian caused the death of Dick Grayson and claimed the mantle of Nightwing for himself, working with the One Earth Government and hunting all criminals with extreme prejudice.

As Nightwing, Damian first appears, crashing into Joker's Asylum, quickly knocking out several Joker Clan goons before spotting the Clown Prince of Crime himself standing over the defeated Hawkgirl. Seeing his chance, he charges the Joker but is repelled by the clown's razor-sharp cards. When Joker notes him siding with Superman over Batman, Damian only calls his father a criminal, just like the Joker. The two battle, but Damian is defeated. Before the Joker can finish him off, the Insurgents arrive, and Hawkgirl grabs Damian and retreats.

Damian is not seen again until the Insurgents attack Stryker's, joining Catwoman to assault his father and the alternate Green Arrow. While Catwoman battles Bruce, Damian duels with Green Arrow, who angrily demands to know why he joined with Superman, believing this Nightwing to be Dick Grayson. When Damian reveals his identity, his father deflects one of his attacks and explains his son's murder of Dick Grayson before he stole his identity. Damian clarifies Superman was more of a father to him than Batman ever was, but Bruce doesn't care, telling Damian he is not his son.

Father and prodigal son then battle, but Batman proves his superiority over his son and bests him. As Bruce stands over Damian, he declares Dick was his son and that Damian is dead to him.

Damian is seen again in the siege of Gotham.

In the epilogue, he is last seen being arrested along with Superman's other supporters.

In a flashback, Damian first appears as Robin accompanying Batman to Arkham Asylum via the Batplane. Damian expresses confusion over Batman's concern for the inmates, stating that they were "the worst of the worst." After Batman explains Superman's plan of executing the inmates, Damian calls the plan justice. Batman reminds him that killing people isn't justice and states how Superman can't see it and needs time to heal. When Damian questions what would happen to Batman if Gotham was destroyed and Damian was killed by the Joker, he gets no response, unsurprised.

As the two approach Arkham Asylum, the Batplane suddenly shifts to autopilot and attempts to divert back to the Batcave. In response, Batman and Damian eject and proceed to glide into Arkham. However, Cyborg (who was interfering with the Batplane) fired off a warning shot toward the duo, throwing Damian off course and causing him to crash onto a nearby roof. After Batman defeats Cyborg, Damian appears and sarcastically tells Batman he's fine after Batman tells him to improve his gliding skills, and the two proceed to grapple to the Asylum.

After Batman and Damian subdue the guards at the Asylum, Damian questions how Batman is unwilling to kill but is fine with dealing with traumatic brain injuries. In response, Batman orders him to secure the loading docks.

Later, Damian eavesdrops on Batman and Superman's argument behind a column and calls out when the red solar grenade explodes between the two.

As Batman prepares to subdue a weakened Superman, Damian captures Victor Zsasz and presents him to the two heroes. Damian questions the psychopath on the number of victims he's killed, and when Zsasz tells him that he killed 121 people, Damian tells Batman that Zsasz sounds incorrigible to him. When Batman orders him to let Zsasz go, Damian retorts that Batman would rather fight his enemies than confronting the real problem. When Batman warns him while calling him his son, Damian, enraged, forces Zsasz onto his knees, states that Batman didn't raise him, the League of Assassins did, and executes the psychopath. When Batman, furious, crosses toward Damian for "crossing the line," Damian attacks him.

After Damian is defeated, he rejects Batman's apology and calls him a coward, questions if Batman thinks he's better than Superman and proceeds to rant that Batman let the Joker keep killing and couldn't save Lois, Jason Todd, or anyone. Superman calms down Damian, and when Damian protests about the inmate situation, Superman states that today wasn't the time, and is taken by Superman. From that point onward, Damian cut all ties with his father and aligned himself with Superman.

In the present day, Damian is revealed to be held captive alongside Superman and Cyborg in Stryker's Island, guarded by Firestorm and Blue Beetle. As the two arguing heroes walk by, Damian shakes his head as he hears the mention of their job of "defending Superman and his cronies." Later, as Wonder Woman and Black Adam attempt to rescue Superman, Damian is freed by Supergirl and is given his gear, though he thinks he is dreaming.

Dressed in his Nightwing costume, Damian confronts Firestorm and Blue Beetle in the power center, stating how "the old man's" standards have dropped and noting how desperate the two heroes are to impress Batman, considering that he's weak. When Blue Beetle asks what Damian would be if his father's weak, he states he takes after his mother. Depending on the player, Firestorm or Blue Beetle will engage Damian, resulting in his defeat.

In the meeting room, Damian and Black Adam are assigned to join Superman at the Fortress of Solitude to look at any potential weaknesses of Brainiac from the Kryptonian records. Unable to find anything, the trio is unexpectedly visited by Supergirl, who was astonished by Wonder Woman's ruthlessness against Harley Quinn and Cheetah. Upon learning of Superman's hand in killing Joker and the lies she's been told by Black Adam and Wonder Woman, Supergirl immediately leaves to inform Batman. Damian and Black Adam attempt to stop her but are both defeated. After this defeat, he disappears completely from the story.

Raised by the League of Assassins and further trained by his father, Batman, and his ward, Nightwing, Damian Wayne models his fighting style after Dick's instead of Bruce's, combining his speed and athleticism for devastatingly fast attacks. Damian also uses much of the same weaponry as Nightwing, including escrima sticks able to combine into a staff, the sticks capable of channeling electricity for ranged attacks, and WingDings for long-range striking. Unlike his father and Dick, Damian does little to restrain himself in a fight; however, he will employ lethal force, making him slightly more dangerous, though this is impeded by his emotional instability, as he has not learned to control the anger he inherited from the Dark Knight.

Deadly Arsenal: Robin's character trait is the ability to use a variety of trap Birdarangs that can be activated remotely by pressing the button again while they are active. By pressing certain directional inputs with the character trait button, it allows Robin to use a different type of Birdarang and also throw them at varying distances. The three types are Smoke Pellet, Explosive Birdarang, and Remote Birdarang.

Nightwing had beaten his former boss, Superman, in single combat. Not even Batman had done that. His thirst for conflict grew. He began challenging anyone who crossed his path. Nightwing's belligerence eventually drew the attention of Sinestro. His Corps was always in need of new recruits, and the young human seemed able to inspire great fear. Sinestro had his suspicions confirmed when a yellow power ring found its way onto Nightwing's finger.

Bruce Wayne was my father, and it's no secret I hated him. But despite all that, he sacrificed himself to save me. Giving me the chance to stop Brainiac... permanently. I was so obsessed with escaping the Bat's shadow... that I never appreciated what the symbol really meant. Not until I saw it stained with my father's blood. My blood. The symbol is my legacy--a legacy of vengeance. My name is Damian Wayne. Son of Bruce, grandson of the Demon. I've been called Robin and Nightwing... But from now on, the world will know me as... Batman.

During the prequel comic, Damian wears a green domino mask over his face, bladed green gauntlets, and green boots, a red tunic with the 'R' logo on his chest. The tunic is over a black armored bodysuit of similar design to Batman and Nightwing's. He wears a yellow utility belt like theirs as well and a black cape with yellow inner linings.

In this costume as Nightwing, Damian has longer hair, a smaller red emblem when compared to Dick's, matching shoulder guards, and a new set of metallic armor. 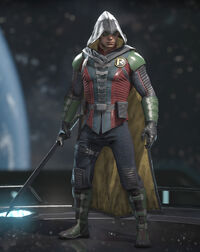 To the right is the base skin for Robin, Son of the Demon. He is wearing his default gear. The remainder of his costumes can be found on his gallery page.