Injustice:Gods Among Us Wiki
Register
Don't have an account?
Sign In
Advertisement
in: Males, Humans, Neutral,
and 10 more

Red Hood (not to be confused with The Joker's former identity), a known anti-hero and former partner of Batman, is a playable character in Injustice 2 (2017). He is classified as a Gadget user in the game.

Jason Todd once served as Batman’s second protégé "Robin" before being brutally murdered by the Joker. Years later, the powerful healing waters of the Lazarus Pit brought Jason Todd back to life. However the power of the pit comes at a cost, and a change takes hold in Jason. He now uses the mantle of the Red Hood to wage a lethal war on crime.

Jason is briefly mentioned by Superman when Batman visits the Kryptonian in the Red Sun Prison.

In issue #46 of the comic, the fake Batman is revealed to be Jason Todd.

Damian Wayne mentioned Jason to Batman that he couldn't save him. However, it turns out to be false as Jason was revived by Ra's Al Ghul's Lazarus Pit as Red Hood.

Red Hood is a current DLC fighter from Fighter Pack 1.

Jason retains his individual spirit, not fully siding with neither the Insurgency or the Regime, though he has a hatred for the Regime, citing that their actions had went beyond the pale and they are ultimately responsible for a lot of deaths, both civilian and costumed, despite admitting about executing the criminals with a still very unforgivable sin. Damian is the exception, as they have a neutral terms each other although Jason does hold some resentment towards him for killing Dick Grayson (accident or not) and for the crimes he committed under the Regime.

In comparison to his adopted father, who combines overwhelming barrages of brute force with pragmatic stealth and high-tech weaponry, Red Hood uses a speedier fighting style that emphasizes his speed and athleticism. Jason’s a master martial artist, defeating hordes of enemies with ease. While Acting as the copycat Batman, Jason defeated Bruce in hand-to-hand combat and fought evenly with Wildcat before shooting him to quickly finish his mission. Jason uses his guns and knife for devastatingly fast combo attacks to overwhelm his opponents into submission.

Red Hood carries around shuriken for long-range striking, and his guns carry the ability to create electrical charges that he can channel by striking them together for an initial charge.

Going Ballistic - Red Hood electrifies his pistols and uses them as blunt weapons, enabling him to use new combos.

These combo strings are required to do any combo for Red Hood when using his Character Trait.

Once these strings are completed, Red Hood has the option to end the combo in the following ways;

That. Felt. Good. Titanium composite hollow point bullets with a C4 kicker. Fastest, most explosive ammo in the world. I made them myself. With the invasion over, Bruce and Superman started fighting again. I wasn't down with either of them. On the one hand, the Regime's right. Scumbag murderers and rapists deserve to die. But on the other hand, I'm no fan of government authority. Especially the dictatorial variety. So while the World's Finest fight each other, I fight for the people. The weak. The innocent. Anyone who can't protect themselves. When they cry out for a savior, I'll answer. As for the criminals who threaten them? They need to know that their actions have consequences. That the Red Hood is coming for them. 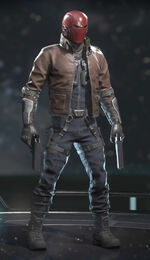 To the right is Red Hood's base skin, Red Hood Rising. He is wearing his default gear. The remainder of his costumes can be found on his gallery page.