Injustice:Gods Among Us Wiki
Register
Don't have an account?
Sign In
Advertisement
in: Injustice 2, Injustice 2 Playable Characters, Heroes,
and 9 more

View source
watch 02:13
'Injustice 2' - Introducing Raiden!
Do you like this video?
Play Sound

Raiden, who hails from the Mortal Kombat franchise, appears as a playable guest character in Injustice 2 (2017). He is available through DLC as part of Fighter Pack 2.

The God of Thunder has sworn to defend the Earthrealm from any and all threats. As the inter-universal crisis brought about by Brainiac rings out across the multiverse, Raiden is summoned to fight the collector of worlds to protect both realms. Raiden knows that if this universe falls, his own universe will become Brainiac's next target.

In earlier versions, he was also mentioned by Black Adam when Black Adam fights Joker as well as in Injustice 2.

Joker questions Black Adam that he has met that other lightning guy, to which the former confirms.

Black Adam says that it was the person with the bamboo hat as Raiden's appearance, which confirmed that he could be a DLC Character in Injustice 2.

Based on his bio and ending, he had been transported here mysteriously and wants to defeat Brainiac, so he may not pose a threat to either the Injustice Earth or his own.

Due to being a god, Raiden has specific powers and abilities over the elements of lightning and thunder. He can channel such power through his body in great amounts and use it for flight and teleportation. He can channel so much lightning that he can actually break the laws of physics by channeling it through insulated wood. Though an immortal being, however, Raiden must take on a form susceptible to mortality, although he does maintain his godly powers in this form.

Even without using his powers, Raiden is a very skilled combatant, particularly in the ways of martial arts.

Though I had defeated Shinnok, his corruption of Earthrealm's Jinsei has cracked the barrier between my realm and this one. I began having visions of Brainiac's collection of this Earth. I realized that Brainiac's actions would soon destroy the barrier among all the realms. All life would be annihilated. With Brainiac dispatched, I tended the injured. His wounds too great, Kent Nelson could not be saved. But as he died, he warned me: the Armageddon I had foreseen was the design of the Lords of Order. By destroying reality, they would return the multiverse to a perfectly ordered state, obliterating Chaos. To defeat this powerful magic, the Justice League turned to this Earth's most proficient wizards and sorcerers. I gladly accepted the invitation to join them. The Lords will be contained, Order and Chaos will remain balance. Life as we know it, will continue. 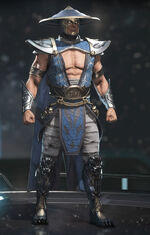 Raiden was revealed in his gameplay trailer to have a premier skin, in which he gains the appearance of DC Universe's Black Lightning.

To your right is Raiden's skin, Thunder God. He is wearing his default gear. The remainder of his costumes can be found on his gallery page.