Injustice:Gods Among Us Wiki
Register
Don't have an account?
Sign In
Advertisement
in: Batman Villains, Villains, Females,
and 11 more

Poison Ivy is a supporting antagonist in Injustice 2.

She is a plant controlling super-villainess who frequently battles with the Dark Knight, Batman. She is also a longtime friend of Harley Quinn. Despite her plant-based powers, she is a Gadget User. Poison Ivy appears as a playable character in Injustice 2 (2017).

Dr. Pamela Isley was once an innovative but radical botanical biochemist with a singular goal: to make the world safe for plant life to flourish. She joins the Society to further their common interest in bringing mankind to its knees, but at heart, Ivy’s desire is to ensure that in any new world order, flora dominates fauna.

Poison Ivy ambushes and captures Black Canary, Green Arrow, and Harley Quinn when they try to intercept the shipment of fear gas in Slaughter Swamp. Harley is at first relieved to see her, hoping that she will help them, but Ivy later admits that she is part of the Society, much to Harley's disappointment and sadness. She then explains that Batman had promised to preserve the Green, but all Batman had done was build more cities over the Green, making Batman no different than Superman in her eyes. While she was explaining her motives, however, Harley had been cutting the vines holding her, and after Ivy finishes her statement, she successfully escapes, followed by Canary and Arrow. Harley tries one last time to convince her to turn on the Society and join them; she coldly refuses the request, and the two fight, with Harley emerging as the victor.

She later ambushes Cyborg, Catwoman, and Harley Quinn at Arkham Asylum and infects Harley with her iconic pink pheromones, causing her to attack either Cyborg or Catwoman (depending on the player's choice), while the other will battle Poison Ivy. Either way, Harley Quinn is eventually defeated. Poison Ivy then expresses disgust towards Catwoman, who was spared from the harsh treatment at Arkham Asylum (thanks to Batman) that the other inmates had to undergo. Suddenly, Harley Quinn begins to go into shock, forcing either Catwoman or Cyborg to try to take care of her, while the other fights Poison Ivy, with either Cyborg or Catwoman emerging victorious. She is not seen again for the rest of the game.

She, along with the other members of the Society, disband once she realizes that Brainiac will destroy the Earth rather than let them conquer it.

Ivy uses her plants to assist in her attacks with methods such as poison, tendrils, and even creatures made from her plants. Ivy's agility and strength have improved, allowing her to fight bare-handed with little difficulty.

Of all the men I've charmed, Brainiac was the most useful. With his help, I finally slaughtered the so-called heroes. Then I whispered in his ear, "Collect every last city on Earth and I'll give you a kiss." And he did. Every last city, I finally brought human civilization crashing to the ground. As for Brainiac, he got the kiss he deserved. But he was just a fling. After all, I was going to be busy leading the Green... I should've known there'd be some competition. Swamp Thing's sympathy for humans makes him weak. The plants know I'm their real guardian. And when the leaves settle, there will be no doubt--this world is mine. 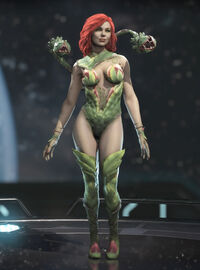 Poison Ivy's costume is rooted in plants resembling a corset and divides at the chest. Her plants also cover most of her legs up to her thighs.

To the right is the base skin for Poison Ivy, Seductress. She is wearing her default gear. The remainder of her costumes can be found on her gallery page.