Injustice:Gods Among Us Wiki
Register
Don't have an account?
Sign In
Advertisement
in: Non-Playable Characters, Heroes, Males,
and 9 more

Kilowog makes several cameo appearances in Injustice: Gods Among Us. He is the Green Lantern of Sector 674.

Kilowog is a high-ranking officer and drill instructor of the Green Lantern Corps, tasked with teaching and mentoring newly recruited Lanterns. The last surviving member of his planet, Bolovax Vik, Kilowog has no family members because they are all deceased. He distinctly refers to all of his trainees as "Poozers." In addition to his service with the Corps, he has also been involved with the Justice League and the Rocket Red Brigade.

Kilowog leads a large gathering of Green Lanterns to Korugar to investigate claims of Sinestro abusing his power and ruling the planet Korugar. When the Lanterns arrived, Kilowog demanded an explanation, telling his former student that the situation didn't look good. Instead of responding, Sinestro attacked all of the Lanterns, and while Kilowog was able to deflect a sword construct Sinestro summoned, he was unprepared for the maddened Lantern to take a bite out of his shoulder.

Kilowog watched with restrained fury as he tended to his wound as several of the gathered Lanterns restrained Sinestro and Hal Jordan stripped his former mentor of his ring.

Kilowog patrols the ocean planet of Landwend when he is contacted via his ring and informed to return to Oa.

Kilowog returns to Oa, making his way for the Guardians spire, seeing his former student Hal Jordan along the way. He's delighted to see the 'poozer' and gives him an exuberant embrace. Before the two can speak anymore, Ganthet calls Kilowog to him, reminding him that the council is waiting. Kilowog follows after Ganthet.

Kilowog is ordered to lead a group of Corps members to Earth to apprehend Superman and bring him back to Oa for trial. Shortly after informing Hal of this, he reveals that the Guardians no longer trust him and have ordered him to take Jordan's ring. When Hal asks if they think he's just going to let them attack his planet, Kilowog tells his former student not to "be stupid."

When Hal sees he is surrounded, he releases a burst of power from his ring, catching Kilowog and the Corp members surrounding him off-guard, giving the drill instructor a bloody nose. Enraged at being attacked, Kilowog orders the Corps after the fleeing Jordan. With help from the Guardians, they manage to capture and restrain Hal and bring him back to the planet.

While Hal is trying to reach out to his fellow human John Stewart, Kilowog cuts him off with a vicious punch across the jaw, prompting Jordan to taunt him for beating up a man with his hands tied behind his back. Infuriated, Kilowog orders Jordan freed, but Ganthet intervenes and belays that order, commanding Kilowog to simply end it. Kilowog draws his fist back as John hefts Jordan up, with Hal trying one last time to bait him.

Not falling for it, Kilowog knocks Hal out with a single blow. He then orders John to take Hal's ring and to put him in a cell. Kilowog then orders his squad with him as they leave for Earth to bring in Superman.

Kilowog and his team arrive on Earth outside Utah at the Salt Desert, where Superman, Shazam, and Hawkgirl await the Green Lanterns' arrival. Kilowog greets the Man of Steel and informs him that the Guardians want to see him on Oa. Superman refuses to go, and Kilowog clarifies he has orders to bring him in before pleading with the Kryptonian that he would like to do that without any trouble.

Hawkgirl then demands to know where Hal Jordan is, and when Kilowog doesn't respond, Superman gives the word to Cyborg to attack. Kilowog looks up and only has a chance to utter, "No frikking..." when he and the rest of the Green Lanterns are caught in a massive beam fired from the Watchtower.

Kilowog survives the beam, angrily growling as he charges up at Superman while his squadron of Lanterns goes after Hawkgirl and Shazam. Kilowog summons a large hammer construct using his ring in an attempt to strike Superman, but the Man of Steel easily dodges and flies behind him, holding Kilowog in a chokehold as he scolds him for trying to attack him with a thought based weapon, proclaiming himself faster than thought and that they can't touch him. Kilowog responds with, "Then I guess it's lucky we already thought of that."

Superman suddenly recoils, eyes glowing green as a thin green beam strikes him, with Kilowog saying, "See, we already touched you." Superman goes down hard and sees the Green Lantern Ch'p floating over him. Kilowog admits they always underestimate the squirrel as it's revealed Ch'p brought him down by using his ring to stop the synapses from firing in his brain.

Soon after, the rest of the Lanterns defeat and imprison Shazam and Hawkgirl, and Kilowog orders his team to start wrapping things up. When Arisia asks what they should do with their extra prisoners, Kilowog decides they will be brought before the Guardians as well. He then asks Ch'p if he can keep Superman's brain out of action until they arrive on Oa.

Ch'p replies that he can right before his head is suddenly pierced by a yellow-bladed construct, causing Kilowog to cry out his name. Whirling around, Kilowog gapes in shock upon seeing Sinestro floating above them, while the former greatest Green Lantern mocks him for always having a squirrel on his team.

Kilowog and his squad are in an all-out battle with Superman, Shazam, Hawkgirl, and Sinestro, and while Kilowog engages with Superman personally with several of his squad-mates backing him up, he is repelled by a blast of Superman's heat vision to his face, his force-field from his ring barely protecting him. Before Kilowog can really cut loose on Superman, Hal Jordan suddenly appears, ordering him to stand down as he restrains Kilowog's ring hand with a construct. Before Kilowog can react, dozens of Sinestro Corps members arrive.

Realizing how vastly outnumbered and overpowered they are, Kilowog orders his team to stand down and stop fighting. Kilowog turns to Superman and exclaims, "We yield! Okay? We're done." He then requests to take the wounded and the dead and be allowed to return to Oa.

Sinestro refuses to allow this, telling Superman that they will simply return with the rest of the Green Lantern Corps. Though Hal refutes Sinestro's words, Superman agrees, and Kilowog and his team are suddenly surrounded by the Sinestro Corps' greater numbers.

Kilowog and his team are taken prisoner, their hands bound in yellow constructs to keep them contained. Kilowog silently observes the argument between Sinestro and Superman's allies, with Sinestro enforcing an execution while Hal Jordan openly refuses to commit such an action. When Shazam says they won't condone executions, reminding the warlord they're heroes, Kilowog speaks up.

"You sure about that? 'Cause I don't remember a lot of "heroes" who were happy to be seen standing so close to the scum of the Sinestro Corps." Kilowog's words, unfortunately, provoke a reaction from his analog in the Sinestro Corps, Arkillo, who grabs Kilowog with several yellow constructs and begins constricting his body in painful contortions. Though Hal is quick to react, demanding Arkillo release Kilowog while placing a vice construct around Arkillo's head, Arkillo only reminds Hal that the Green Lanterns are outnumbered, and he threatens to keep squeezing until Kilowog breaks.

Kilowog manages to call Arkillo a coward, only for the squeezing to intensify. Thankfully, Superman intervenes and forces Sinestro to call Arkillo off. Superman then decides to hold the Green Lanterns as prisoners on Earth and orders them to remove their rings. Kilowog barks over him, though, ordering, "Do not!"

Superman promises Kilowog that if they remove their rings, they will be humanely detained and no harm will come to any of them, while Arkillo attempts to bait Kilowog, challenging him to fight back so that the Sinestro Corps can have an excuse to kill all of them. Superman ultimately manages to appeal to Kilowog by reminding him that this is the only way any of the Green Lanterns will make it out of this alive. Seeing no other choice, Kilowog removes his ring, his team following suit.

However, as he hands it over to Superman, Kilowog tells him, "You should have come quietly. The Guardians are going to kick your ass." Kilowog and his squad are then taken in as prisoners.

Superman has taken Kilowog and the other captive Green Lanterns as prisoners to the Trench, an underwater prison. As Plastic Man infiltrates the Trench after stealing some power rings from the Regime as his plan to release his son, Luke along with the other Lanterns.

Plastic Man, disguised as a guard talks to Kilowog about his plans. He then asks Kilowog to start a prison riot as a diversion in which he approaches Bane. Kilowog tells to Bane that he does not know how to insult his mother in his own language before dealing a headbutt against Bane, starting a riot. Plastic Man informs them to stop and throws all of the power ring he has stolen for Kilowog and the other Lanterns to wear.

However before Kilowog could wear his ring, Sinestro appears and fires a Yellow beam from the ceiling, piercing Kilowog in the chest and killing him.

Kilowog appears during Green Lantern's victory pose, with other Lanterns from the Corps.

In the Metropolis stage, Kilowog can be seen fighting Atrocitus or another Red Lantern in the background of the rooftop portion of the arena.

During Green Lantern's S.T.A.R. Labs Missions, Kilowog appears to aid Hal during his battle against The Joker.

Kilowog possesses innate superhuman strength and durability and is extremely intelligent, when combined with his mastery of the green power ring, makes him one of the most formidable Green Lanterns in the known universe. Kilowog has all the standard powers afforded to him by a power ring, including construct creation, which he primarily uses for striking weapons like hammers, beam and barrier projection, and flight at speeds approaching light. Kilowog is so formidable as a Lantern, he is able to go head to head with Superman himself.

Kilowog is a massive humanoid alien with pink skin and piggish-like features on his face, including tusks and red eyes. He wears the standard Green Lantern uniform, the Corps symbol glowing on his chest and his ring worn on his right hand. 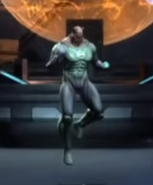 Death of Kilowog
Community content is available under CC-BY-SA unless otherwise noted.
Advertisement