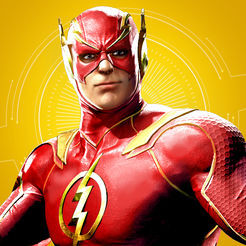 Injustice 2 Mobile is the Sequel to Injustice: Gods Among Us Mobile on iOS and Android. Like its predecessor, a free-to-play mobile app based on Injustice 2 was released for iOS and Android devices on May 11, 2017. The app was soft launched in the Philippines App Store in February 2017. It maintains several gameplay features from the original, including the swipe-based fighting mechanics, card collection, and three-on-three battles, but introduces various changes to the game's overall formula. Players are now given the ability to move around the stage freely during combat, as well as use jumping and crouching attacks. The stamina management system returns; however, instead of each character receiving their own allotment of stamina, the player is given a single pool of stamina which depletes after every match. Fights also require higher levels of stamina than the previous game.  The app includes login bonuses; daily objectives, which offer experience and coins; and achievements, which are long-term goals that reward players with premium gems and "hero shards" used for unlocking and leveling up characters. It also features game mechanics similar to those found in the console versions, such as ability and gear upgrades.  The app includes a story mode, which will be released chapter by chapter in subsequent updates. According to Google Play, the Android version of the app has been downloaded at least ten million times since its release.

Who’s in your Justice League? Join your favorite DC Super Heroes & Villains in the best fighting game on mobile. Assemble a team of heroes like Batman, Flash & Wonder Woman to combat the forces against you. Master new combos and crush opponents in dynamic 3-on-3 battles. Upgrade your Super Heroes with special powers as you fight your way through the game. Become a champion by collecting gear for your characters and dominating your foes in PvP contests. Every battle will define you—join the fight and become the ultimate DC champion!

• Unleash epic combos on your opponents using Superman’s heat vision, The Flash’s lightning kick, Harley Quinn’s cupcake bomb and much more
• Take your battles to the next level—inflict massive damage using your favorite DC characters’ super moves
• Earn rewards from each fight to customize your Super Heroes with powerful gear, and collect special characters like Armored Superman, Arkham Knight Batman and much more
• Team up with friends and assemble an unstoppable League! Together you can prevent the collection of worlds and defeat the ultimate boss, Brainiac.
• Be social—chat with friends, donate hero shards, participate in Raids, and more!

• Injustice 2 continues the story set in motion in by the hit game Injustice: Gods Among Us
• Immerse yourself in cinematics straight from the console—with the Justice League shattered it is up to you to pick-up the story and unite a team
• Experience the best graphics on mobile—play with Superman, The Flash and many more in high definition combat
• Become the champion the world needs—enter a contest of Super Heroes where only the powerful win

FIGHT YOUR WAY TO THE TOP

• Join the contest—enjoy daily challenges and rise up the leaderboard with every victory
• Enter the PvP arena and fight players around the world to become a champion
• Unite the likes of Flash, Supergirl, Batman and more to fight in epic PvP combat

Join now today and unite YOUR Justice League and download this game from here now.

Retrieved from "https://injustice.fandom.com/wiki/Injustice_2_Mobile?oldid=148060"
Community content is available under CC-BY-SA unless otherwise noted.