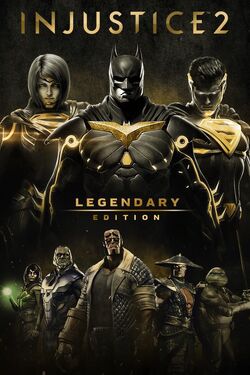 Announced on February 28, 2018, the Legendary Edition of Injustice 2 was released on March 27, 2018. It is available for the PlayStation 4, Xbox One, and Microsoft Windows.

It includes all 10 DLC characters, 5 Premier Skins, an expanded tutorial system called the "Learn Hub", new gear items, and an increased character level cap. Additionally, those who pre-ordered the Day One Edition of the Legendary Edition received a collectible coin, a steelbook case, a "comic exclusive download steel card", and 11,000 Source Crystals to use in-game.

Since the Justice League's Superman had defeated the One Earth Regime's High Councillor Superman, Batman and his Insurgency have been working to piece back together the world. This hasn't been easy as they had to deal with the remnants of the Regime, a new villain group called "The Society," and the arrival of Brainiac.

Premier Skins serve as skins that change the appearance, voice, personality for the characters and they even use powers from the base character. If it's not yet obtained, then they cost about 6,000 Source Crystals each for one skin. For example, the Black Lightning, John Stewart, Power Girl and Reverse-Flash premiere skins are all part of Injustice 2: Legendary Edition.

Retrieved from "https://injustice.fandom.com/wiki/Injustice_2:_Legendary_Edition?oldid=147330"
Community content is available under CC-BY-SA unless otherwise noted.