Injustice:Gods Among Us Wiki
Register
Don't have an account?
Sign In
Advertisement
in: Real World, Gameplay, Games

Injustice: Gods Among Us Ultimate Edition 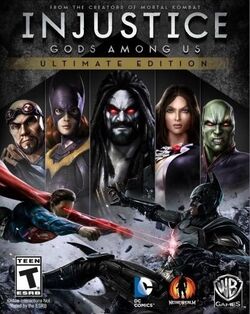 Announced on October 7, 2013, the Ultimate Edition of Injustice: Gods Among Us was released on November 12, 2013. It is available for the PlayStation 3, PlayStation 4, PlayStation Vita, Xbox 360 and PC.

Injustice: Gods Among Us is set in an alternate reality. The Joker has hoaxed Superman into killing Lois Lane and the couple's unborn son, all the while destroying Metropolis. Overcome with grief and anger, Superman takes revenge against the Joker; killing him in cold blood in front of Batman. While he has confronted his tormentor, Superman still cannot overcome the guilt of what the Joker made him do. Quickly, he takes control of various nations across the planet and establishes a new world order as the High Councillor to achieve world "peace". The heroes of the earth are confronted with a choice; join Superman's Regime or ally with Batman's Insurgency. A war ensues between the forces, one which will threaten the very survival of mankind.

Injustice: Gods Among Us was first announced on May 31, 2012,[1] shortly before the Electronic Entertainment Expo. Developer Ed Boon revealed plans to offer depth and promised a rich amount of single-player content and layered features for tournament players.[2] Similar to Boon's previous DC-related title, Mortal Kombat vs. DC Universe, there are restrictions on how violent the game can be, though Boon states he is planning to push the T rating, replacing violence with "crazy, over-the-top action." [3]

Injustice: Gods Among Us Ultimate Edition features a roster of 30 characters from the DC Comics universe, spanning from iconic characters like Batman, Superman, and Wonder Woman, to lesser-known characters such as Solomon Grundy, Killer Frost, and Zatanna.