Injustice: Gods Among Us Mobile

The mobile version, which was released on iOS devices on April 3, 2013, and Android devices on November 21, 2013, is a free-to-play game with buyable upgrades, such as Power Credits and Energy Cards. Recent updates have included DLC Characters such as The Red Son Pack (with Superman, Wonder Woman, and Solomon Grundy) and the Man of Steel pack (it contains an exclusive Superman and Zod).

A Challenge Mode also exists, allowing players to get exclusive Gold Character Cards by beating many battles within a certain time.

The following characters can be claimed (that are confirmed) from Challenge Mode (in order):-

Injustice for the mobile features different gameplay than its console version, resembling more of a card battle game than its "fight-style" console counterpart. Players collect characters in the form of cards and use them on 3v3 battles to defeat their opponents.

The player starts with three random Bronze characters at the beginning of the game and can get more characters by completing specific battles, buying them from the shop, or earning them as rewards from the Challenge Mode. Every character can level up, and buying more copies of characters allows you to promote them to Elite cards; every "Elite" on the character has bonuses towards Damage and Health. Character cards come in three rarities; Bronze, Silver, and Gold. The higher the rarity, the better base stats come with the character. Each character has a "Passive Ability," which grants them a boost in gameplay for themselves or for the whole of the team. (For example, Superman Regime gains 50% more damage for 6 seconds at 40% health). They also have two Special Attacks, which are unlocked at Levels 1 and 5, respectively. The higher the Special Attack, the more powerful it is. The first two Special Attacks can deal Special Effects such as Poison, Power Drain, Bleeding, Frozen, or Stun the opponent. The level 20 attack is a Super Move which is a High-Damaging UNBLOCKABLE Attack.

Each battle requires "Energy" to use before a battle starts; as many as 1-3 Energy may be used for battles. Each character has 10 Energy slots that recharge over time. Suppose a character lacks the energy to participate in a battle. In that case, the player must wait until it is recharged or use an Energy Consumable, which can be rewarded from matches or as daily rewards. Energy can also accumulate faster for cards by purchasing a "Support Card" for each character found in the shop or from "Booster Packs". Cards that boost Health and Damage can be found as well.

The Online Mode allows iOS players to play against other AI-controlled player teams and was added to the game on April 24, 2014. Although the multiplayer matches are not in real-time, the winner of each match gains battle rating that is added to the Leaderboard for each "Leaderboards Season." Furthermore, gear cards can be added to characters to increase their stats.

Occasionally, and exclusive character is awarded to players who rank high enough in that season. Characters awarded this way include Ares, Cassandra Cain Batgirl, and the Batmobile, a Batman-specific legendary gear.

The Challenge Mode is an event that happens usually twice a month, that may last for 10–17 days. It consists of 63 battles within five certain "Sub-Challenge Stages". Each of the five challenges has a certain requirement in order to beat them or even partake in them.

Any version of the named character will work. For example, if it requires Bane on their team, Bane, Regime Bane, Luchador Bane, or Knightfall Bane will work. In certain challenges, there are certain criteria instead of a character, such as requiring a Red Son character or a Regime character.

In the 1.7 Update, Challenge Mode will be repeatable up to three times if eligible. This is ONLY from Elseworld Flash onwards. For example, the challenge with Elseworld Flash will be repeatable, so that's it possible to claim the prizes three times. However, with each repeat, the challenge mode gets significantly tougher; the difficulty starts from Normal, then to Expert difficulty, and finally Nightmare difficulty. The same mechanic of completing the challenges one by one to get pieces for prizes will still apply. In higher difficulties, players may be rewarded with character cards of bronze or silver rarity, or very rarely gold. The Expert difficulty takes 2 Challenge Credits in every battle, and in Nightmare difficulty, it takes 3 Challenge Credits per battle up from the original one required. Therefore, it'll take 63, 126, and 189 (a grand total of 378 credits) to complete the Challenge mode fully. However, from the Killer Frost challenge onwards, the player only needed 1 Challenge Credit per battle regardless of difficulty.

The 1.8 Update added Batgirl back as a repeatable challenge. Old challenges such as Zod and Red Son Deathstroke are likely to make a return in this way, just as 600 Wonder Woman and Darkseid did.

Furthermore, the 2.2 Update brought in new challenge characters, which are Red Son Green Lantern, Zatanna, Raven and Aquaman. Cassandra Cain Batgirl could be found in the game files and was later released as an online challenge.

The 2.3 Update brought in Godfall Superman, Animated Batman Beyond, Static Shock and MKX Scorpion. The Batmobile is released as an online challenge. Ra's Al Ghul Dagger and Static's Disc are found in gear packs.

The 2.4 Update, released on 19 May 2015, adds a new set of Gear and adds Killer Frost Prime, Arkham Origins Bane and Joker, Bounty Hunter Lobo, and Regime Hawkgirl. Multiplayer has been buffed and passive abilities for current characters have been updated.

These characters are rewards from previous (or ongoing) challenge modes. 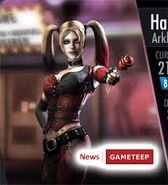