Start a Wiki
watch 02:00
'Injustice 2' - Introducing Hellboy!
Do you like this video?

Hellboy, a character from Dark Horse Comics, is a playable guest character who appears in Injustice 2. He is available through DLC as part of Fighter Pack 2.

As a member of the Bureau for Paranormal Research and Defense, Hellboy has defended the world from fiends, witches, demons, and more than a few Lovecraftian Gods. With his trusty revolver and his Right Hand of Doom, Hellboy has made monster disposal his specialty.

Hellboy serves as a downloadable character as part of Fighter Pack 2. In the game, Braniac has brought Hellboy from his original universe in order to add him into his 'special collection'. To which Hellboy responds by beating him down. After that, his popularity rises after defeating Braniac, he was offered positions and help from numerous individuals but became bored quickly, stating that 'it is not his thing'. When he returned back at his universe and into the Bureau, it was not the same as usual. Hellboy soon decides to retire from his job and takes refuge in Africa.

While fighting Hellboy uses his revolver as well as an assortment of specialist grenades and magical relics; but his the majority of his attacks are based on the Right Hand of Doom his supposedly indestructible stone-like hand which gives him enhanced strength and invunerability, which also serves as his great defense. He also displays skilled marksmanship with his revolver, the 'Good Samaritan.'

Black Lightning and Vixen mention it will take everything they have to beat Hellboy.

Hellboy pulls out one of his medallions, engulfing him in an aura along with a flaming crown and flaming horns. He gains one of the following traits based on a button input:

Somehow, Brainiac shanghaied me on a slow boat to this universe. Bastard had big dreams about me in his "Collection". Guess what I thought about that idea. Taking Brainiac out certainly got folk's attention. I got a lotta offers to stick around, but I got bored quick. Megalomaniac villains and tights-wearing heroes really aren't my thing. What's it they say? Home is where the heart is? But when I got back, things just weren't the same. The bureau was too small. Was time for me to hit the road. Africa was totally the right call. The wide open spaces suit me. Clean air, starry skies and, not surprisingly, more than a few monsters to hunt. All in all, makes for a pretty good life. 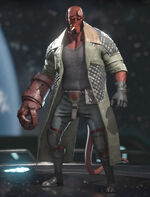 Hellboy's base costume is identical to his design in the comics, he wears a thick trench coat with a grey undershirt, mid-length padded pants and boots that reveals the toes of his hooves.

To the right is Hellboy's base skin, Anung Un Rama. He is wearing his default gear. The remainder of his costumes can be found on his gallery page.

Retrieved from "https://injustice.fandom.com/wiki/Hellboy?oldid=146315"
Community content is available under CC-BY-SA unless otherwise noted.