Injustice:Gods Among Us Wiki
Register
Don't have an account?
Sign In
Advertisement
in: Gadget Users, Heroes, Characters,
and 13 more

Arrow Skin (Injustice: Gods Among Us)

Green Arrow is a major character in Injustice: Gods Among Us and Injustice 2 , classified as a Gadget User.

Upon his mother and fathers' passing, Oliver Queen was the CEO of his own conglomerate, Queen Industries. This would be halted when during a yacht party, an accident sends him shipwrecked on an island. Using his survival skills and proficiency with a bow and arrow, he would make his way back home to Star City. He used his archery skills to become the vigilante Green Arrow, fighting crime alongside his sidekick Roy Harper. It wasn't long before his skills were recognized by the Justice League, being recruited to the team and becoming a frequent mainstay, even when other people like Roy would take his place.

Insurgency (Gods Among Us)

An early opponent of Superman's oppressive government, Green Arrow was struck down and murdered during the High Councilor’s rise to power. He is remembered as a hero and martyr by the Insurgency, his death greatly affected his wife Black Canary and strengthened her resolve to stop Superman once and for all.

It’s been a hard traveled road of the emerald archer, as this Earth’s Oliver Queen gave his life in the fight against the Regime. As an alternative Earth’s Ollie steps in to honor that sacrifice, he will join his wife Black Canary in Batman’s crusade to set things right.

Oliver Queen has long since been murdered by Superman by the time the events of Injustice occur. He was a part of the Insurgency before the time of his death. He is looked at as a hero in this world and remembered for having the courage to fight against Superman when necessary.

In the normal dimension, Green Arrow shoots a cushion arrow at Black Adam to prevent him from his falling death. Before Green Arrow and Flash will fight Doomsday, Superman takes the fight and Arrow was brought into a parallel universe along with Batman, Wonder Woman, Green Lantern, Aquaman, and the Joker. Arrow, Lantern, Wonder Woman and Aquaman are seen in Gotham as they discover it is alter dimension. After Aquaman and Green Lantern head to their cities, Wonder Woman and Green Arrow are attacked by Regime Sinestro, Arrow is trying to fire him and Sinestro knocks him and Lantern arrives and defeats him.

After Sinestro and Yellow Lantern were defeated, Green Arrow, Wonder Woman, and Green Lantern meet Insurgency Batman. With the help of Batman, Arrow and the others are searching for their Batman as they enter Wayne Manor and Batman tells them about his Green Arrow's death. In Wayne Manor, they also encounter Regime Killer Frost and Solomon Grundy and Arrow starts a fight with Grundy, Arrow aim and shoots Grundy. After defeating Grundy, Ollie heard Grundy's groan, told Lantern to handle it and then Arrow tells them "You kids have fun, stay out of the street." Killer Frost froze Wonder Woman, Arrow shoots at the frozen Wonder Woman and frees her. Ollie fights with Frost and defeats her. When they arrive in the Batcave, Black Adam and Regime Wonder Woman arrives and Ollie defeats Wonder Woman. As Arrow watches Aquaman get knocked unconscious and decides he will finish Adam and defeated him.

Arrow and Insurgency Batman make their way to Stryker's to rescue Normal Batman until Regime Catwoman and Nightwing arrive. After Catwoman is taken down, Ollie thinks this Nightwing is Dick Grayson and it is reveal that this Nightwing is Batman's son, Damian Wayne, who caused Dick Grayson's death. Arrow is controlled by Regime Raven to shoot Insurgency Batman after rescuing Normal Batman. When Arrow is out of Raven's control, Batman orders Arrow to take his Batman to safety while he fights with Yellow Lantern. Arrow and the Batmen encounter the High Councilor, Superman and they jump off the cliff and teleport.

After Luthor's death, Arrow starts sharpening his arrow, giving a romance quote to Black Canary's picture "What do you think, pretty bird? Perfect as always." Regime Flash arrives at the Insurgency and recognizes Ollie, Arrow shoots at Flash and one of his arrows is a smoke bomb. Arrow was taken down and Flash came to warn him and the Insurgents.

After Superman's defeat, Green Arrow and Aquaman are rounding up his accomplices. Before the Flash turns himself in, he gives Ollie one last smile as he also gets one from him.

Green Arrow is first seen waiting for Batman with his wife Black Canary. He was then sent with Harley Quinn and Black Canary on two successive missions. The first mission is in which they were sent to stop Scarecrow from shipping a quantity of fear gas to Grodd from a hideout in Slaughter Swamp. They were then confronted by Poison Ivy and later Swamp Thing.

They later invaded Gorilla City where they defeated several foes such as Doctor Fate, Catwoman, Bane, and Gorilla Grodd along with his apes. They were later captured by Brainiac and taken to his ship. They were forced to fight Black Adam and Aquaman in Kahndaq after being mind-controlled by Grodd. They are both freed after Aquaman killed Grodd with his trident.

Like Batman, Oliver Queen has trained himself to his physical peak and relies on several technological devices to help him fight crime, but where Batman uses multiple items in various forms, Green Arrow primarily relies on his bow and arrow. Oliver is a trained athlete and has some martial arts skills for basic hand-to-hand combat tactics, but where Oliver's true skill lies is in his archery mastery. Green Arrow's bow can shoot more than just standard arrows; Ollie relies on all sorts of trick arrows, ranging from elementally themed shafts to an arrow with a boxing glove at the end to explosive tipped arrows. Ollie can use the bow itself as a striking weapon for surprise attacks.

Take Aim: Green Arrow's character trait is the ability to use his arrows with a single button press. By pressing certain directional inputs with the character trait button, it allows Green Arrow to change the type of arrow he uses into one of three elemental types: Fire, Electric and Ice.

After the fall of Superman, Green Arrow visited the Star City of this parallel Earth. His counterpart was one of the first heroes to fall in the battle against Superman, one of the first to object to The Man of Steel's new tactics and reasoning. A memorial erected in Star City's Orchid Bay served as a reminder of the need to fight oppression, regardless of the odds. There, Green Arrow found that one citizen wasn't content to memorialize Oliver Queen in stone. With Green Arrow's training, a new archer, dressed in crimson, took up the fallen hero's mantle. Let Star City's criminals beware. The night belongs to Red Arrow.

Taking down that green-skinned bastard got me thinking about the people of my Earth. My universe's Brainiac had never come calling. I had to warn them. By the time I got home, it was too late. My Earth was *this* close to being gone for good. But that's when the strangest cavalry you've ever seen rode in. It was a full-on, multiverse Justice League! They'd been hopping between universes, battling Brainiac in every one. I couldn't refuse when they asked me to join. I've seen what Brainiac can do. Nobody, in any universe, should have to face that threat again.

Green Arrow wears a dark green shirt with a hood underneath a long light green vest, dark green pants, and green boots. He carries a quiver along his back filled with arrows and has a dark green strap that goes along his chest. He also has long green gloves, a black mask, and green padding on his arm. On the other arm, he has a green gauntlet with gold accents and wears knee guards and green boots. His bow is a traditional Longbow that looks to be made from fiberglass and has laminated carbon fiber reinforcements on the limbs. It also has a detachable scimitar-style dagger mounted on it.

Green Arrow wears a dark green shirt with a yellow undershirt. He has brown shoulder guards with an elaborate gold pattern on them. He also wears brown padding on his forearms. His pants are green with brownish-red accents, and he has black boots with gold on the ankles. 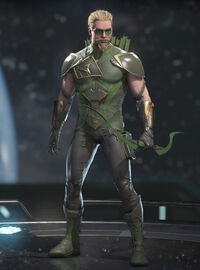 To the right is the base skin for Green Arrow, Emerald Archer. He is wearing his default gear. The remainder of his costumes can be found on his gallery page.