Injustice:Gods Among Us Wiki
Register
Don't have an account?
Sign In
Advertisement
in: Villains, Males, Flash Villains,
and 13 more

He is one of Flash's arch-enemies and the leader of the Society.

Telepathic brute Gorilla Grodd has long sought to prove his peerless genius by subjugating mankind. He’s gone so far as to form an anti-Justice League, the Society, to once and for all smash their opposition. Using his intellect and telepathy, Grodd enlists others in his mission to conquer the planet and fill the void of power left by Superman’s Regime.

Gorilla Grodd appears in the courtyard background on the Stryker's Island stage, battling several guards attempting to restrain him. A player can knock their opponent into Grodd as an interactable, causing the ape to throw the victim back, causing damage.

When the Earth is about to be destroyed by Brainiac's betas and Kahndaqi is revealed when Black Adam opens the gateway to the Rock of Eternity, Brainiac requests that he and the Society retrieve a sample of the Rock of Eternity, wishing to study Earth's "magic". Grodd then informs him that the Society had disbanded when they realized that Brainiac would destroy the Earth rather than let them conquer it. Despite this, Grodd remains loyal to Brainiac, and he is sent to Kahndaq. Grodd then brainwashes Green Arrow and Black Canary (accompanied by several gorilla warriors) to fight Aquaman and Black Adam. After Black Canary and the gorilla warriors are defeated, Aquaman asks Grodd why he would sacrifice Gorilla City for Brainiac. Grodd, via Green Arrow, explains that he is loyal to neither Gorilla City nor Brainiac, who explains that he plans to wait for Brainiac to expose his weakness and then kill him, thus making his ship his own. When Aquaman and Black Adam defeat Green Arrow and finally open the gateway, Grodd brainwashes Blue Beetle and sends him to get to the Rock of Eternity as a sleeper agent. When Grodd makes himself known, Aquaman or Black Adam defeat Blue Beetle and Grodd. Aquaman then kills Grodd by stabbing him twice with his trident, finally avenging Atlantis.

Gorilla Grodd is a highly evolved gorilla with an intelligent mind and a powerful brain. He is capable of telepathy and telekinesis, enabling him to control his foes both mentally and physically. Grodd's gorilla body is also far larger, stronger, faster, and more durable than the average human being, allowing him to overwhelm his enemies with brute force while simultaneously tearing their minds apart with telepathic assaults. 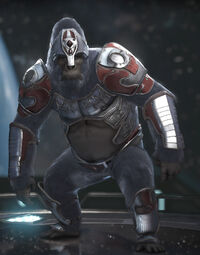 Gorilla Grodd lives up to his name as a massive gorilla, easily twice the size of a full-grown man, and wears armor consisting of gauntlets, pauldrons, knee pads, a belt, and a helmet.