Injustice:Gods Among Us Wiki
Register
Don't have an account?
Sign In
Advertisement
in: Males, Humans, Metahumans,
and 9 more

View source
watch 01:36
'Injustice 2' - Introducing Firestorm!
Do you like this video?
Play Sound

Firestorm is a playable character in Injustice 2, appearing as a supporting character.

Two minds sharing one super-powered body, Jason Rusch and Martin Stein are only beginning to master their abilities as Firestorm. However reconciling Jason’s brash personality with Martin’s more empirical approach is no small task. While these two don’t agree on much, one thing they never argue about is helping Batman rebuild a safer world.

Firestorm, alongside Blue Beetle, was asked by Batman to be a final line of defense of the imprisoned Superman should the Regime remnants attempt to free him. Their role was more essential due to Brainiac's invasion.

After Brainiac initiates the second phase of his plan, Jason argues with Jaime over Batman, not considering them important in the face of Brainiac's invasion. Dr. Stein tells Jason to take in the bigger picture and remember that he hasn't mastered his powers yet, with Jaime outlining a possibility of the Scarab and the Firestorm Matrix, when used against Brainiac, destroying the world. Angry, Jason tells them to listen to themselves, reminding them that they are badasses and that "badasses belong on the front lines." Dr. Stein states they are on the front lines, stating Brainiac's invasion is a "crisis," but both Superman and Brainiac's destruction an "apocalypse," with Jaime summarizing that they are in between a crisis and apocalypse, and Jason readily agreeing to this point. When the prison facility begins to shake due to Black Adam and Wonder Woman's assault, Dr. Stein suggests to Jason that they fuse, and the two become Firestorm. Blue Beetle and Firestorm eventually rush off to defend the power center, as the entire defense system is linked to it, allowing Superman to escape should it shut down.

Regardless of choice, Black Adam is defeated, and the two heroes meet again. Firestorm suggests that they go back to lockdown Superman, but the two are confronted by Damian, who comments on Batman's standards dropping and their desperation to impress Batman, considering that he's weak. Depending on the player, Firestorm can engage Damian or alternatively flies off to secure Superman.

Firestorm and Blue Beetle later eavesdrop on Kara and Superman's reunion, showing shock over another Kryptonian. As Kara files off, Blue Beetle expresses his doubts, but Firestorm tells him that she's not out of their league and asks him what happened to his confidence. When Blue Beetle states that "Kryptonians happened," Firestorm reminds him that Batman is counting on them.

Firestorm confronts Cyborg, who had just knocked Blue Beetle out, by asking him about his melting point before firing a blast toward him, which Cyborg deflects back with an energy shield. Eventually, the red solar energy generators shut down, and Firestorm tells Blue Beetle that they need to reactivate them. Depending on the player, Firestorm confronts Cyborg once more, reminding him of his former status of a Teen Titan and telling him that he'd never thought of being his prison guard, and Cyborg acknowledging how long ago that was and that he was no longer a prisoner. Alternatively, Firestorm attempts to restart the generators while Blue Beetle fights Cyborg.

The two heroes are successful in their goals, and Superman remains contained. When Superman attempts to convince the two to release him, Firestorm states that Batman asked for help instead of drafting them. Kara then restrains Firestorm and warns him to stay away, and throws him downward. However, Firestorm reveals that Dr. Stein had an emergency plan for Kryptonians and begins to summon fire fueled by kryptonite, weakening Kara. When Kara cries out that he was as bad as Wonder Woman and Black Adam had said, Firestorm asks for her to surrender, and then he'll stop. However, he is attacked by a determined Kara and ceases to continue weakening her. Depending on the player, Firestorm will fight Kara directly or Wonder Woman off-screen.

After Kara/Wonder Woman is defeated, Firestorm rejoins Blue Beetle. However, Wonder Woman returns, who is joined by Black Adam, Cyborg, Damian, and Kara to attack the two. Firestorm then receives a suggestion from Dr. Stein and is shocked about the implications. He attempts to dissuade him but eventually realizes that there is no other option. Firestorm proceeds to gather a massive amount of energy and confirms Blue Beetle's suspicion of nuking the facility, stating that it's the only way. He then threatens the opposing side to leave, or they'll "get a helluva lot worse than a sunburn." When Wonder Woman asks if he'd rather blow up Metropolis than releasing Superman, Firestorm responds that he'll save the Earth, provoking the Amazon to attack him. However, she is disarmed by Batman, who orders Firestorm to stand down. Firestorm shows visible shock among the others when Batman frees Superman.

Firestorm is present in the meeting between both factions and later joins Batman in a side conversation, private due to Firestorm summoning flames to obscure the conversation. Firestorm attempts to apologize for his actions at the prison, but Batman cuts him off by calling it reckless and telling him to never pull something similar ever again. However, he tells Firestorm to make it up by undertaking another mission discreetly. Because only Batman rejoins the meeting, it is assumed that Firestorm left immediately for the mission.

Firestorm is later captured by Brainiac and brainwashed to serve him. Batman or Superman fights him, depending on the player's choice, but both he and Swamp Thing (who was also brainwashed) are freed by Batman.

Jason Rusch: The professor and me worked our tails off to control our powers. But Stein figured out the only way to defeat Brainiac was to lose control.

Martin Stein: I correctly calculated that overheating Brainiac's engines would weaken him. But the quantum disruption we created caused an unexpected chain reaction... The Skull Ship exploded... and every city Brainiac stole from Earth was obliterated. Metropolis. Coast City. All of them.

Jason Rusch: We thought we'd finally be the big heroes. The ones everyone looks up to.

Martin Stein: But in our hubris, we lost sight of the hero's duty: protecting others at all costs.

Jason Rusch: And we can't make that kinda mistake again.

Martin Stein: But still, if you ever need us, Batman... 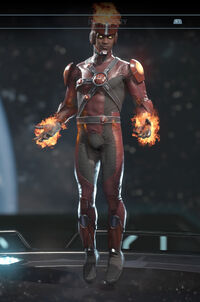 To the right is the base skin for Firestorm, Nuclear Man. He is wearing his default gear. The remainder of his costumes can be found on his gallery page.