Start a Wiki
watch 01:48
'Injustice 2' - Introducing Enchantress!
Do you like this video?

Enchantress is a longtime magical villain, sometimes hero, who uses her Magical Powers for whatever suits her whims. She is also a downloadable character in Injustice 2.

The all-too-ordinary life of June Moone ended the day she was possessed by the enchantress, a demonic sorceress with aspirations of world domination. Today, she fights for her very soul, struggling to harness the enchantress’ magic for good. If she fails, the enchantress will consume her - and our world won’t be far behind.

June Moone was a freelance artist who was invited to a costume party at an old castle and stumbled upon a secret chamber where an unknown magical being (later named as Dzamor) empowered her to fight an evil presence in the castle. Saying the words "The Enchantress," her appearance changes from blonde-haired June to black-haired and costumed Enchantress and defeats a minotaur creature from a tapestry. Soon after, she defeats a monster at Cape Kennedy and a mirage of a demonic creature manipulated by a crook.

In her next appearance, however, the Enchantress is a misguided character fighting Supergirl, who prevents her gaining omnipotent magical power and canceling all other superpowers on Earth, twice. Her villainous side takes over after this, and the Enchantress then continues her career as a member of The Forgotten Villains and part of the army of supervillains during the 'Crisis on Infinite Earths' event.

The Enchantress is a powerful sorceress. She appears to possess the ability to manipulate magical energy for any number of effects, from healing to teleportation, and can directly affect any non-living objects with her magic. She can also walk through walls.

A unique aspect of her power is her sensitivity to magic. She was able to link to the essence of Eclipso in the Day of Vengeance storyline, using the connection to speak Eclipso's thoughts to the rest of the group, and has also mystically tracked the Spectre by divining his magical trail. She has also been seen to remotely access another magic-user's power, as she did when she channeled the power of almost all magical beings on Earth through her to Captain Marvel to aid him in his battle with the Spectre, and again with Strega of The Pentacle, though all of the magicians she came into contact with allowed her to tap into them.

After the Strange Adventures run, the evil Enchantress side manifested whenever June Moone changed. Later, her evil side manifested only when was under great magical stress which overloaded her, and she returned to normal once the overload subsided. This is no longer the case since the 'Soulsinger' identity separated the evil Enchantress entity without her powers before dissipating, leaving June Moone with the Enchantress power but not the evil personality.

She has possession of Nightwitch's "Herne-Ramsgate Cauldron," which allows her to find almost every magical creature in the DC Universe.

In the New 52 the Enchantress displayed a wide variety of magical powers, but due to being separated from June Moone, they appeared at random and manifested across the planet in different guises, such as animating the Sphinx in Giza and making it attack tourists, and creating dozens of June Moone doubles wandering around on the freeway. Her defenses were formidable, easily seeing off Superman, Wonder Woman and Cyborg with a storm of old human teeth and later beating Zatanna off with a host of zombies. When June was finally brought to the Enchantress' location, she manifested as a colossal monster made up of the bodies of hundreds of June Moones. Once she was fused back in June, she regained control of her powers. She has also displayed all of the abilities previously exhibited by her New Earth version.

Though the Enchantress has claimed that June does not have access to her magic - in several Suicide Squad issues, June was shown performing magical feats herself such as banishing a demon.

Divinity Spell: Enchantress casts a magical spell that levitates her body above the fightline, allowing her to build super meter. (Ability)

Hypnotic Spell: Enchantress puts her opponent into a hypnotic trance and lures them to her. Meter Burning Hypnotic Spell allows Enchantress to follow up with an extended combo. (Ability) (Replaces Astral Soul Rip) (Requires Both Ability Slots)

Split Personality: Enchantress now has an alternate character trait which allows her to create three clones of herself in order to deceive her opponent. She gets to choose which clone to control depending on the button input. (Ability) (Replaces Xibalba Trait) (Adds Split Personality Trait)

June Moone: When it comes to magic, even Brainiac has a lot to learn. He thought he could "collect" the power of the Enchantress. So I let him have it. And sure enough, the old witch ate him alive. It was over. Brainiac was beaten. But even more miraculously, the Enchantress... was gone. After years of that witch feeding on me, torturing me, corrupting me... I'm free. No more aliases, no evil alter-egos, I can just be June Moone. I got my old job back at the design studio, I even have a date this Friday! Piece by piece, I'm rebuilding my old life. Once I've--

Enchantress: June, June, June. Did you really think you could dispose of me so easily? Brainiac's collection was a revelation. You and I have been thinking far too small. Why corrupt one Earth, when we can bewitch all 52? 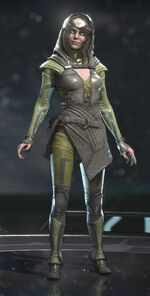 To the right is the base skin for Enchantress, Succubus. She is wearing her default gear. The remainder of her costumes can be found on her gallery page.

Retrieved from "https://injustice.fandom.com/wiki/Enchantress?oldid=146901"
Community content is available under CC-BY-SA unless otherwise noted.