El Diablo is a meta-human criminal who is obsessed with fire. It later caused the death of his wife and children.

He first appear among the Suicide Squad members presented by Amanda Waller to Harley Quinn. He followed the Batman copycat when he break them out.

When Batman's team enter Ra's al ghul's base he is ordored to destroy the exit. 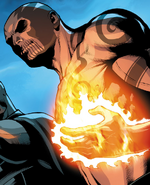 Add a photo to this gallery
Retrieved from "https://injustice.fandom.com/wiki/El_Diablo?oldid=144228"
Community content is available under CC-BY-SA unless otherwise noted.