Powerful sorcerer Kent Nelson wears the Helm of Fate and sees the fate of all mankind, for better or worse. He knows the world will end—either by Brainiac’s hand, or in a war between Batman and Superman. Though the Helm compels Kent to preserve this grim fate for the sake of Order, Kent’s humanity compels him to intervene on behalf of his heroic friends—and risk the unforeseeable consequences.

His costume is featured in the Hall of Justice, in a display case behind the teleporter.

His Tower is featured in Zatanna's ending.

Doctor Fate first appears after a confrontation at Gorilla City between heroes Green Arrow and Black Canary pitted against The Society members Catwoman, Bane, and Gorilla Grodd. He tries to warn the heroes about impending doom and how Brainiac is the order to the chaos caused by Earth's inhabitants. After being defeated by the two heroes, Kent explains he lost control of Nabu but also cannot help as he has "Changed fate too many times." He then leaves before saying that it can't be stopped and that their fate rest in the God's hands now.

Much later, Kent is seen walking down a nearly-destroyed Metropolis with the helmet of Nabu in his arm. He approaches a dying citizen, reaching down to help her, but is denied by Nabu as she (the citizen) and the rest of humanity are destined to fall. Kent begins to question the moral choices brought on by The Lords, and is forced to carry out actions to stop those hindering Earth's destruction as long as he wears the attire pieces of Nabu.

His final appearance is a battle between him and Superman aboard Brainiac's ship. He's defeated and Superman destroys the helmet that had been manipulating Kent. The voices of the Lords dissipate, and Kent agrees to working with the loosely assembled League of Superheroes in stopping the invasion. Right after a warning that imposing the Lords' actions could result in chaos spreading throughout the universe, he was impaled through the chest by Brainiac and sucked into the lining of the ship's walls. In Raiden's arcade ending, he was confirmed killed.

Dark Magic: Doctor Fate will say an enchantment, making his magic attacks even stronger than before.

The Amulet of Anubis: Doctor Fate sucks the opponent into a portal on his chest that brings him to a room inhabited by three Dr. Fates who slam him into the wall, strike him with two orbs, and push him with an amulet that ejects him out of his chest.

The Lords of Order believed Earth couldn't be saved. That only Brainiac's evil could restore Order. I knew refusing the Lords' Fate would anger them, and that they'd try to destroy me. Anyone else would have nowhere to run. Fortunately, I still have friends in low places. The House of Mystery guards the Helm. Zatanna and Constantine's spells conceal me from the Lords. But it was John's daughter, Rose, who gave me the greatest gift of all. My wife, Inza, returned to life and in my arms again! For the first time since taking up the Helm, I don't know what tomorrow will bring. And that is... perfect. 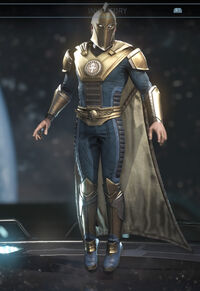 Doctor Fate wears the golden helm of Nabu to hide his face, the golden Cloak of Levitation and wears a blue bodysuit along with gold gloves and boots.

To the right is the base skin for Doctor Fate, Servant of Order. He is wearing his default gear. The remainder of his costumes can be found on his gallery page.

Retrieved from "https://injustice.fandom.com/wiki/Doctor_Fate?oldid=145943"
Community content is available under CC-BY-SA unless otherwise noted.