Injustice:Gods Among Us Wiki
Register
Don't have an account?
Sign In
Advertisement
in: Males, Humans, Batman Villains,
and 15 more

Injustice: Gods Among Us Mobile
Injustice 2

He is one of Batman's enemies and a member of the Society.

Deadshot is a hired assassin and the world's greatest marksman. Being a mercenary, he'll commit any murder for the right price because of a notorious suicidal death wish. Despite this, he works very hard to protect his estranged ex-wife Susan Lawton and his daughter Zoe Lawton. He has been a member of Checkmate, the Killer Elite, the Secret Six and the Suicide Squad.

Deadshot appears in Stryker's Island, taking cover behind a pillar and periodically exchanges shots with the guards.

In Harley Quinn's S.T.A.R. Labs Missions, Deadshot ambushes Quinn, targeting her with missiles and grenades, preventing her from interrogating him about the Joker's apparent death.

Prior to the events of Injustice 2, Deadshot was found and captured by Gorilla Grodd, who had implanted a nano explosive within Deadshot's head, and would be detonated should Deadshot not join the Society. The mercenary does, being the only unwilling member.

He is first seen at Slaughter Swamp, telling Scarecrow to order his men to pick up the pace in loading up the boats with Fear Toxin. Scarecrow assures him that his men will finish. Once Poison Ivy captures a spying Green Arrow, Black Canary, and Harley Quinn, Scarecrow sends him off.

He is then seen onstage during Grodd's speech and, after the speech, tells him that they're ready to move out, with Grodd then ordering him to tell the others about the news.

He is later seen at Metropolis, shooting Flash in the leg and leaving him to be finished off by Captain Cold. When Captain Cold fails to do so, he then attempts to kill Flash himself. Flash dodges the bullets and holds onto Deadshot. He then asks why he would join the Society, with Deadshot explaining about the nano explosive in his head, forcing him into the Society. After explaining, he stabs Flash as well as himself simultaneously with a knife before engaging in battle, with Flash emerging victorious.

He is later seen with Bane ambushing Cyborg and Catwoman trying to bring Brother Eye back online, though they are defeated.

He, along with the other members of the Society, disband when he learns that Brainiac will destroy the Earth rather than let them conquer it.

Lock & Key: Expert training comes to play as Deadshot takes out his opponent.

Bullet Hell: Deadshot uses all his weaponry to unleash a storm of bullets at the enemy.

Never Miss: Deadshot takes out his rifle, locks and loads, and heaves it down on his opponent’s head. After this, he throws his rifle into the air, punches the opponent to the face, followed by a knife stab. He then does a spin and bashes his them in the head with his elbow, takes the knife out and shoots them in the back with his wrist-mounted cannon, and then stabs and shoot them again. He then grabs the rifle as it falls from the sky, slings it over his shoulder, and shoots his opponent in the head.

Assassin's Code: Deadshot shows why he is one of the most deadly assassins around.

Grodd used the damned nano-explosive in my head to make me his bitch. The jobs he made me do... Well, let's just say they crossed some lines. I bet taking Brainiac and Grodd to the authorities would beat doing another stretch in Belle Reve... and I was right. Bruce Wayne even bankrolled getting rid of my TNT migraines for good. I freakin' hate hospitals, but God was it worth it. With that nano safely out, I could finally see Zoe again. Last time I saw my little girl, she had nine candles on her birthday cake. Now, I gotta second shot at being Dad -- and I sure as hell don't plan to miss it. 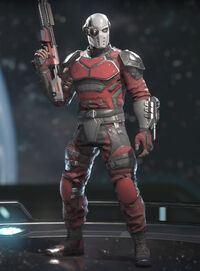 Deadshot is seen in his normal costume for most of his appearances, which consists of a red bodysuit with a yellow and silver target emblem on his chest, a silver neckline and waist with a golden belt, his customized wrist-mounted handguns, yellow gloves, silver boots and his trademark silver mask with the red targeting module over his right eye.

His outfit in Injustice 2 consists of an armored red bodysuit with gunmetal-grey accents and pauldrons, grey and red cargo trousers with leather patches around the pelvic region, red knee pads, black army boots, and a white metal mask with a scanning laser on the right side.

To the right is the base skin for Deadshot from Injustice 2, The Professional. He is wearing his default gear. The remainder of his costumes can be found on his gallery page.