Injustice:Gods Among Us Wiki
Register
Don't have an account?
Sign In
in: Villains, Males, Gods,
and 11 more

View source
watch 01:43
'Injustice 2' - Introducing Darkseid!
Do you like this video?
Play Sound

Darkseid makes a cameo appearance in Injustice: Gods Among Us as a stage transition. He became playable via pre-order bonus for Injustice 2.

A being of pure hate incarnate, the lord of Apokolips Darkseid demands the total subjugation of all existence. His merciless obsession has left a wake of suffering and obliteration as he seeks the Anti-Life Equation. With his invincible body, limitless strength, army of Parademons, and the annihilating power of his Omega Beams make him not only a threat to this world, but to every world within reach.

Darkseid sits in his throne room, until any hero or villain is teleported to Apokolips from the Hall of Justice via a Boom Tube. He beats whoever appears and then hits him/her with his Omega Beams, which sends them flying back into the Boom Tube, teleporting him/her back to the Hall.

Darkseid is the first downloadable character available for Injustice 2. Darkseid had arrived on Earth because Superman killed his son, Kalibak.

Darkseid is a being known as a "New God", which are inhabitants of the planets New Genesis and Apokolips. Darkseid is virtually impervious to physical harm, much like Superman. He also possesses superhuman strength, which rivals that of Superman. As a New God, Darkseid is virtually ageless. One of the most unique of his abilities is his ability to generate beams of intense energy from his eyes; unlike Superman, he can move them about in a zig-zag fashion, so they always hit their target. He is also capable of levitating thanks to his telekinesis.

Despite all of his powers, Darkseid is by no means invincible. Like all New Gods, he is vulnerable to the element known as radion. A significant amount of it is enough to bring him to his knees. Beings of similar or equal strength like Superman are capable of weakening him in a fight as well.

The Coluan, Brainiac, was a genius without peer. But. I. Am. A God. I could not allow an errant intellect to steal the object of my vengeance. Superman refused to submit to my will, denied my conquest of Earth, and killed my son, Kalibak. He suffered and perished. But not until I told him exactly what would happen after he died. Kara Zor-El proved quite resilient, but eventually, DeSaad broke her. She is a powerful weapon--a natural leader for my new, invincible breed of parademons, cloned from the DNA of Superman himself. Superman robbed me of my blood. Now, our score is settled. That is the will of Darkseid! 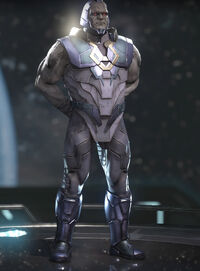 To the right is the base skin for Darkseid, Lord of Apokolips. He is wearing his default gear. The remainder of his costumes can be found on his gallery page.

Community content is available under CC-BY-SA unless otherwise noted.