Injustice:Gods Among Us Wiki
Register
Don't have an account?
Sign In
Advertisement
in: Villains, Females, Humans,
and 9 more

View source
watch 01:49
'Injustice 2' - Introducing Cheetah!
Do you like this video?
Play Sound

She is one of the Wonder Woman's arch-enemies, alongside Ares and a member of the Society.

When archaeologist Barbara Ann Minerva betrayed Wonder Woman to claim the powers of a god, she was unaware that she would be cursed to live a life transformed as the Cheetah. She now uses her primal powers to take revenge against Wonder Woman, drawing her out of hiding in hopes of bringing about her doom.

Cheetah is first seen as a member of Gorilla Grodd's Society and then is partnered with Captain Cold as part of the first wave the invasion.

She is part of the invasion to Atlantis, where she ambushes Green Lantern. She demands to know where Wonder Woman is, but Hal refuses to tell her and she attacks him. She escapes and makes her way to Metropolis and attacks Wonder Woman and Supergirl with a new weapon.

Cheetah is cutting Supergirl with her claws when Wonder Woman comes and knocks Cheetah away. Wonder Woman is surprised Cheetah follows Gorilla Grodd's orders, but Cheetah reveals that she only joined The Society to draw out Wonder Woman. Cheetah lost the fight and would have been killed by the merciless amazon but Harley Quinn stepped in to save her life by shooting Wonder Woman's sword out of her hand. After Harley equates Joker with Superman, Wonder Woman angrily tosses Cheetah away to fight Harley.

An interaction between Superman and Cheetah reveals she, along with the other members of the Society, disbands when she learns that Brainiac will destroy the Earth rather than let them conquer it.

Cheetah possesses enhanced strength, speed, durability, stamina, and agility all comparable to Wonder Woman, allowing her to fight the Amazon on an even playing field. Her claws are strong enough to cut and wound Wonder Woman, and Minerva possesses a genius-level intellect.

Hungry for his blood, I prepared to claim Brainiac. But the alien, desperate to save his life, sputtered out an offer. Brainiac said that if I spared him, he'd deposit any of his collected beings I wanted on a world of my choosing. There I could pursue them at my leisure. So now I hunt, free from Wonder Woman's interference. With each kill, I glorify the Goddess. As for Brainiac? Of course I didn't abide our agreement. I'd never give up on killing him. A true huntress always catches her prey. 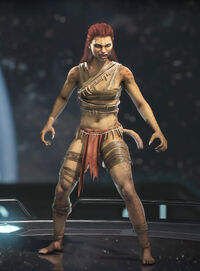 Cheetah is a human/cheetah hybrid, her body covered entirely in fur. To the right is the base skin for Cheetah, Minerva's Curse. She is wearing her default gear. The remainder of her costumes can be found on her gallery page.