Injustice:Gods Among Us Wiki
Register
Don't have an account?
Sign In
Advertisement
in: Characters, Gadget Users, Villains,
and 18 more

View source
watch 01:46
'Injustice 2' - Introducing Catwoman!
Do you like this video?
Play Sound

Catwoman is a minor antagonist of Injustice: Gods Among Us and a major character of Injustice 2, classified as a Gadget User. She is a playable character. Utilizing her bullwhip, acrobatic skills, and steel claws, Catwoman is one of the fastest fighters in the game.

She is a former enemy of Batman and member of the Regime but turned to the Insurgency.

Growing up in the harsh environment of Gotham City, Selina Kyle was only able to survive on the streets through her seductive charm and skills as a petty thief. Later on into adulthood, she worked in the East End as a hopeless dominatrix, until she saw Batman in his early days fighting crime. Seeing him inspired her to take her thieving skills to a bigger scale by fashioning a costume and calling herself Catwoman. As time passed, she and the Caped Crusader became notable adversaries, but it would also be converted into a sort of relationship, with Batman sometimes saving Catwoman from a villain or both of them working together against said villain. It conflicts with Batman's morals to love a girl that's known for being a criminal. This would end up having Catwoman become more of an antihero as of late, serving as a constant ally to the Bat-Family and other heroes of Gotham.

Master thief Selina Kyle has won the hearts of many men - including Batman. She sides with law and order when it suits her, but rarely lets her feelings for the Dark Knight interfere with her life of crime.

Catwoman sided with Batman against Superman's regime. As the High Councilor’s power intensified, however, she joined the regime rather than fight it to protect Batman. Her decision did not sit well with him.

Consistently walking the line between hero and villain, Selina Kyle's pilfering past as Catwoman prevents Batman from ever placing his full trust in her. As the ashes of the Regime give rise to the sinister Society, the Caped Crusader must again speculate where this thieving feline's loyalties lie.

The prime universe Catwoman is shown invading the Watchtower along with Lex Luthor, Bane, and Solomon Grundy. Later, Raven is shown attacking her with her psychic blasts, though she dodges them with ease. She is eventually subdued, and is seen going through Raven's portal to Arkham Asylum, being escorted by Nightwing. However, she stopped briefly to inquire about an alarm being set off (referring to the detection of a nuclear device in Metropolis), although Cyborg dismissed her by stating that it was the "none-of-your-damn-business" alarm.

The alternate Catwoman, who has joined the Regime, is first seen being teleported to the Hall of Justice, where Cyborg (from the original dimension, disguised as his counterpart) is trying to hack into the security system. She realizes he is acting strangely and suspects him of being from the Prime Earth. She tests his identity by falsely implying they're in a relationship. When Cyborg unwittingly complies, her suspicions are confirmed. She attacks him but is defeated.

Later, at Stryker Island, she attacks Batman and Green Arrow alongside Damian Wayne. She tries to convince Batman to leave with her, revealing that she joined the Regime so that Superman would spare him. Batman refuses, causing an angry, heartbroken Catwoman to attack him. He manages to defeat her.

She was last seen being arrested alongside other enforcers of the Regime.

Catwoman works with Batman in the game, but went undercover as a mole in the Society.

She is first seen onstage during Gorilla Grodd's speech. After the speech, she, Grodd, and several other members of the Society, with Catwoman sarcastically states that Grodd's speeches had taken inspiration from Superman's speech. Grodd soon sends off several members of the Society to prepare for the upcoming attack, leaving behind Grodd, Catwoman, and Bane. Catwoman asks Grodd who the "silent partner" is, but the conversation is interrupted by Green Arrow and Black Canary. The three members rush into attack the two heroes, though Black Canary uses her scream to push them back. Grodd tasks both Catwoman and Bane to deal with the heroes and Catwoman faces off against either Black Canary or Green Arrow, but either way, the hero will emerge victorious.

She is later seen at the Justice League table, explaining the plan to defeat Brainiac to the other members. She is tasked with accompanying Cyborg and Harley Quinn to head to the Batcave and bring Brother Eye back online.

The trio boom tube in at the front gates of Arkham Asylum (Cyborg can't boom tube in straight to the Batcave as Batman had reverse-engineered his mother box technology), before being ambushed by Poison Ivy. Harley Quinn gets brainwashed by pheromones, and she attacks either Catwoman or Cyborg, but Harley will be defeated either way. Poison Ivy expresses disgust towards Catwoman for having avoided the torture in Arkham Asylum, thanks to Batman. Catwoman responds by claiming that she never asked for such treatment. Suddenly, Harley Quinn begins to go into shock from the pheromones, and depending on the player, one of the heroes will go help Harley Quinn, while the other will fight Poison Ivy, with the hero emerging victorious. The two then approach an incapacitated Harley before Catwoman demands that Cyborg use his defibrillator on her. This is successful, and the trio venture onward into the sewers. As Cyborg states that Green Arrow and Black Canary are most likely didn't survive as Brainiac only takes the best, Catwoman responds by stating that she'd still take them over him. The three finally reach the entrance of the Batcave, but Cyborg and Catwoman venture onward, while Harley Quinn remains behind to guard the entrance. The duo are ambushed by Deadshot and Bane, but the duo emerges victorious. They finally reach Brother Eye, but before Cyborg can begin fixing it, Brainiac intercepts through the monitors. Brainiac releases Grid from Cyborg's memory subsystems to attack them, but either Catwoman or Cyborg emerges victorious. Cyborg is successful in fixing Brother Eye, but it attacks Cyborg, still identifying him as an enemy, but before any harm can be done, Catwoman calls off Brother Eye.

She is later seen with Batman on the Batwing, ready to attack and enter Brainiac's ship. The Batwing, Superman, and Supergirl engage multiple Beta ships before the Batwing is shot down. Fortunately, Superman saves both Batman and Catwoman from crashing. After Superman's apparent death, the two land and witness Brainiac offer a deal: give up Supergirl to Brainiac, and the Earth will be spared. They don't take the deal and formulate a new plan that involves Aquaman and Black Adam heading to Kahndaq, using the power of the Rock of Eternity to take down the shields on Brainiac's ship. Catwoman isn't seen again in the story.

Catwoman has trained herself to peak physical condition and trained herself to be incredibly talented at gymnastics, making her lithe, fast, and agile in and on the battlefield. Selina's real skills come in the art of burglary, where she relies on stealth and her silence to rob her targets blind. When forced to fight, Catwoman relies on fast strikes, aided by the claw attachments to her gloves and boots, inflicting powerful, numerous strikes that add up for a cumulative effect while not high damaging on their own. For strong strikes, Selina relies on a bullwhip both for striking, binding, and reeling her enemy in towards her.

Cat Scratch: Catwoman's character trait is the ability to perform a small combo which is best used at the end of combos. Each time Catwoman lands a Basic Attack she has a chance to have 1 Scratch added to her Scratch Meter. The chances of a Scratch being awarded increases with each hit of a combo. Catwoman can also be awarded with 1 Scratch with each successful dodge from an opponent's attack when she uses her Special Moves High Feline Evade and/or Low Feline Evade. Pressing the Character Trait button will perform a damaging combo, with each scratch adding an additional hit, up to a maximum of 5 hits.

At last,Superman had paid for what he had done to Catwoman. Feigning allegiance to his regime had cost Selina her beloved Batman--and her best chance at happiness. Pride and anger kept her from attempting reconciliation with Bruce Wayne. But his inspiring reconstruction of Gotham and Metropolis fostered in her a desire to remain close to him. Until she was ready to approach him again, she did her part to keep Gotham's streets clear of crime. Nascent underworld organizations had both The Bat and The Cat to fear.

With nine lives, it had to happen sooner or later...I got everything I ever wanted--including a handsome prince and a bad-ass reputation as the woman who beat Brainiac. And I must say...I was bored to death. Bruce and I worked better when we were forbidden. When the masks were on and the claws were out. That honeymoon was over, so I did the best thing for both of us. I'm not sad. I didn't become Catwoman to bag Bruce Wayne. I don't ever want to rely anyone but myself. I'll go where I want to go, take what I want to take. And never, ever look back.

Catwoman wears a black leather catsuit and a brown corset, a brown leather backpack, knee-high boots, elbow-length gloves, a cowl with ornamental cat's ears, and goggles. She also wears her whip on her costume disguised as a tail and wears metallic clawed apparatuses on her arms and legs that enable her to slash her enemies.

Catwoman wears a purple leotard and leggings, a cowl with ornamental cat's eyes, and short rubber gloves. She also carries a smaller backpack than her default look and wears clawed gauntlets that allow her to slash enemies. 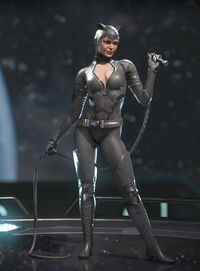 To the right is the base skin for Catwoman, Thief of Thieves. She is wearing her default gear. The remainder of her costumes can be found on her gallery page.