Start a Wiki
watch 01:38
'Injustice 2' - Introducing Captain Cold!
Do you like this video?

Captain Cold is one of The Flash's Villains who appears in the Injustice: Comic Series and as a playable character in Injustice 2.

Sworn to ending all crime, the Regime hunted down and brutally executed every member of the Rogues, including Captain Cold’s sister, Golden Glider. Using his skills as a thief and his iconic Cold Gun, Cold now seeks his vengeance. He’ll gladly use the Society to achieve it.

Captain Cold is first seen onstage during Gorilla Grodd's speech to the Society. He is then seen walking with Grodd and a few other fellow Society members, warning Grodd that he shouldn't betray them. Grodd reassures him that he won't as long as they have a common agenda and sends him off with Cheetah to go with the first wave of soldiers. Before he leaves though, he tells Grodd about the lost shipment of fear toxin and that he hopes that his "silent partner" can still deliver.

He is later seen walking up to his old nemesis, Flash, wounded when Deadshot shot him in the leg and Captain Cold fires a cold blast on his injured leg. Flash then expresses shock that Captain Cold would go along with such a chaotic day. Cold agrees about how chaotic the situation is, comparing it to the day that Superman formed the Regime. Flash tries to convince him to aid him in helping the innocent people caught in the chaos, before Captain Cold angrily refuses, comparing them to his friends and his sister. Ignoring Flash's apologies about his lost friends and sister, he engages in battle with him, with Flash emerging the victor.

Later in the story, he teams up with Reverse Flash in attacking Wonder Woman at the Ace o' Clubs Bar. He attempts to freeze her, but Wonder Woman deflects it, causing Reverse Flash to be hit and freeze. Cold compliments Wonder Woman before the two circle each other. Before battling, Wonder Woman asks why Cold joined the Society. He explains that he did so to gain vengeance against the Regime for executing his sister. Wonder Woman replies that it was his fault that his sister died since he led her into a life of crime, which made her a target to the Regime. The two then fight, but Wonder Woman emerges victorious. He is not seen again for the rest of the story.

He, along with the other members of the Society, disband when he learns that Brainiac will destroy the Earth, rather than let them conquer it.

Captain Cold possesses a cold gun, which generates a cold field at absolute zero temperatures, completely draining molecules of their kinetic energy, preventing them from generating motion. The Cold Gun can also fire streams of ice as beams, creating ice wherever they strike. Cold is a skilled tactician and has led the Rogues for many years.

Going after the Regime was one thing. But destroy the planet for Brainiac? You really thought I'd go through with it, Grodd? Really?! [BLEEP] you!

Sorry it's been a while, Sis. I know I've always got an excuse. But this time, I-I finally figured out the right way to honor your memory. I know what you're thinking--"Old Lenny sold out." So what? I'm making sure the Regime and Brainiac never happen again. Even buried the hatchet with old Scarlet Speedster. Ironically or whatever, he's the best partner I ever had. 'Sides you, Sis. 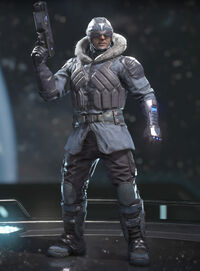 Captain Cold wears a blue body suit of plated armor along with a parka hood and a pair of custom tinted goggles.

To the right is the base skin for Captain Cold, Mister Snart. He is wearing his default gear. The remainder of his costumes can be found on his gallery page.

Retrieved from "https://injustice.fandom.com/wiki/Captain_Cold?oldid=147238"
Community content is available under CC-BY-SA unless otherwise noted.