Injustice:Gods Among Us Wiki
Register
Don't have an account?
Sign In
Advertisement
in: Superman Villains, Extraterrestrials, Villains,
and 14 more

View source
watch 01:45
'Injustice 2' - Introducing Brainiac!
Do you like this video?
Play Sound

He is the secret mastermind behind The Society and an enemy of Superman, Supergirl, the Regime and the Insurgency.

Brainiac is a megalomaniacal genius from the planet Colu, a planet one thousand light years removed from the planet Mars. He roams the universe, collecting knowledge to increase his intellectual and scientific prowess. Obsessed with establishing his superiority, Brainiac captured Krypton’s greatest cities, then eradicated what remained…or so he thought. Tales of the “Last Son of Krypton” have reached far into the stars. Now, the Collector of Worlds comes to Earth to finish his accumulation of Krypton—and discovers a new world worthy of his collection.

Years before the events of Injustice, Brainiac and his forces attacked the planet Krypton, captured its capital city and annihilated the remains of the planet. Because of his success, Brainiac believes that he exterminated the Kryptonian race and thus is unaware of Kal-El and Kara's survival by being sent to Earth.

Brainiac would later be drawn to Earth, primarily due to the conflict between the Regime and Insurgency (as the war alerted Brainiac of the presence of a surviving Kryptonian), as well as the advanced technology Earth possessed. To initiate his invasion, he hacked into Brother Eye, removing it from Batman's hands, and allied himself with Gorilla Grodd, with the latter forming the Society.

Doctor Fate hints at the presence of Brainiac when he speaks to Green Arrow and Black Canary, indicating that he was the first to sense Brainiac's invasion. He would consult the Lords of Order, who believes that Brainiac's conquest could bring order to the chaos created by Batman and Superman's conflict. This belief would create an internal struggle within Doctor Fate as he fights to keep his humanity.

Brainiac's first official appearance is when he appears before Bruce Wayne via Brother Eye, noting the futility of the latter's attempts to regain control. He then states his ultimatum: the world must turn over Superman alongside Earth's advanced technology or risk Earth's destruction.

His unlimited intellect and telekinesis are his most powerful traits, as well as his connection with his ship. He can also collect other planets and turn them into smaller, collectible versions of themselves. Right on his back and shoulders and four super-strong mechanical tentacles strong enough to deal with both Superman and Batman at the same time while he has his arms crossed. Aside from the usual super strength, durability, reflexes, agility, and speed, Brainiac can also heal himself from any dangerous wounds with relative ease.

Skull Ship: Brainiac sprouts his four mechanical appendages in his back, one of them grabs the opponent and kicks the opponent to the ground, he then sends four robots to fire their harpoons on his enemy before his ship arrives and activates a laser beneath the ship that fires down at the opponent, destroying his own robots with enough force from the laser.

Brainiac: Obviously Batman and Superman have many questions. Where did I come from? Why am I here? Am I friend or foe? It is time to reveal the truth. 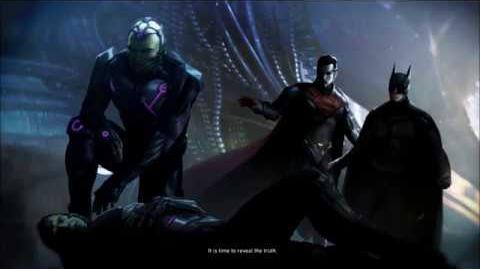 Brainiac 5: I'm Brainiac 5. A descendant of the original Brainiac, but without his homicidal tendencies. In the future, people fear Coluans because of my ancestor. So I elected to come back in time and fix that. Now that I'm done, I'm going back where I belong--the 31st century. The Legion of Super-Heroes will grill me for "borrowing" a time bubble. But all they really need to know is that I'm on their side, and always will be. Long live the Legion! 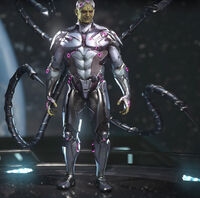 To the right is the base skin for Brainiac, Coluan Conqueror. He is wearing his default gear. The remainder of his costumes can be found on his gallery page.