Injustice:Gods Among Us Wiki
Register
Don't have an account?
Sign In
Advertisement
in: Males, Humans, Heroes,
and 7 more

Blue Beetle is a playable character and supporting character of Injustice 2.

He is the best friend of Firestorm and member of the Insurgency and the Teen Titans.

Jaime Reyes sought Batman’s help in learning to use the Scarab, an alien weapon of mass destruction bonded to his spine. Although the Scarab could pose a deadly threat to the entire planet, kindhearted Jaime is determined to protect people, wary of the corruptive influence of great power he witnessed under the Regime.

Being a teenager, Blue Beetle acts much like a TV show and/or comic book fanboy. He geeks out whenever he sees a lot of his opponents (a lot of them being his favorite heroes) but will show no hesitation in fighting them if they don't reciprocate his love for his heroes.

Blue Beetle is first seen walking down a hall with Professor Stein and Jason. He states his fear of destroying the world if they fought Brainiac. He ducks under the building shaking and states how Superman could break out if the generators shut down. Then he runs down to the generator. They are confronted by Black Adam who is trying to stop the generator. Depending on the player's choice, he will either fight Black Adam or be sent to fix the generator. Then Damian stacks and similarly it is up to the player on who fights him. They head back up to Superman. There, Cyborg is trying to hack Superman's cell and Supergirl is reuniting with her cousin before flying past them. Blue Beetle says that she is out of their league in Spanish. Firestorm wonders what happened to his confidence, he replays saying "Kryptonians happened". Then they briefly fight Cyborg and he knocks out both of them. Blue Beetle either fights Cyborg or fixes the cell. Supergirl flies in and he'll either fight her or Wonder Woman off-screen. Then all of them group together when Firestorm is about to "nuke them" and orders Blue Beetle to leave.

Later in the game, he joins Aquaman and Black Adam at Kahndaq but is secretly being controlled by Gorilla Grodd and fights Black Adam or Aquaman depending on the player's choice. After his defeat, he is not seen again, though it is likely that he was freed from being mind-controlled after Grodd's death.

While Jaime is a regular human, he possesses the Scarab, one of the deadliest weapons in the universe. It grants him flight, sonic cannons, lasers, and blades.

Ancient Scarab: Blue Beetle can switch between his power blades and bare hands. While the power blades are active, his melee attack range and damage increase. However, he is unable to use projectile attacks while they're active.

Oh, man--dude!--I cannot even describe what it felt like! Sure, I was just the newb in the crew. But like, you think I'd ever let Brainiac kill Batman and, what, blow up the world? ¡No manches! When it was over Batman was all-- "The world is safe thanks to you, Jaime. I'd like to make you LEADER of the new Justice League, if that's cool with you." Wow! That was really tempting offer, you know? But if there's one thing better than saving Batman, it's saving mi familia. I haven't been around 'em since I got the Scarab. So for now, I'm moving home and going back to school. And if this so-called "normal" life doesn't work? There's always the Justice League. 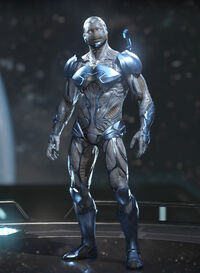 To the right is the base skin for the Blue Beetle, The Reach. He is wearing his default gear. The remainder of his costumes can be found on his gallery page.