Injustice:Gods Among Us Wiki
Register
Don't have an account?
Sign In
Advertisement
in: Females, Heroes, Justice League Members,
and 11 more

Black Canary is a playable character. She is a major character in the Injustice Comic series and Injustice 2 and a member of the Insurgency.

Dinah Lance nearly sacrificed everything in her fight against the Regime but was forced to flee before the fight was done. Now, with Batman restoring order, Black Canary has returned home to set things right, vowing to never again silence her canary’s cry.

Though she plays no real role in the story, a picture of Dinah can be seen in Green Arrow's tool kit as he sharpens arrow heads.

Black Canary is first seen waiting for Batman with her husband Green Arrow. She was then sent with Harley Quinn and Green Arrow on two successive missions. The first mission is in which they were sent to stop Scarecrow from shipping a quantity of fear gas to Grodd from a hideout in Slaughter Swamp. They were then confronted by Poison Ivy and later Swamp Thing.

They later invaded Gorilla City where they defeated several foes such as Doctor Fate, Catwoman, Bane, and Gorilla Grodd along with his apes. They were later captured by Brainiac and taken to his ship. They were forced to fight Black Adam and Aquaman in Kahndaq after being mind-controlled by Grodd. They are both freed after Aquaman killed Grodd with his trident.

Master Martial Artist: Black Canary's skill level is comparable to Batman's, allowing her to easily take on an entire gang of attackers and emerge victorious.

Peak Human Condition: Her physical training has put her at peak human condition, giving her considerable stamina and agility which she uses to great effect in battle.

Canary Cry:- Black Canary's signature ability, a shout with supernatural force behind it. These waves of destructive sonic energy shatter glass and can push enemies away with their force. This is an inborn metahuman power, origin otherwise unknown.

Soaring Knee- Black Canary leaps at her opponent with one knee and then hits them with the other. Meter burn triggers a flip kick which allows for a follow up

High Parry- If this connects, Black Canary will grab her opponent by the arm, flips them over and breaks their arm

Soaring Knee - Black Canary leaps forward with both of her knees, hitting her opponent one at a time with each of them. The enhanced version does more damage and allows for a follow up attack

I'd have loved to kick back and savor kicking Brainiac's ass, but I had to rush home. I didn't know if Connor had made it out of the invasion okay. Turns out, I didn't need to worry. The crazy stress of Brainiac's attack activated my son's meta-gene. And if there's one thing you don't wanna mess with, it's a scared, pissed-off three year-old with superpowers. Sure, I love that Connor takes after me. But raising him suddenly got a lot more complicated. I'm just glad to have people around that can help me and Ollie figure this whole thing out... 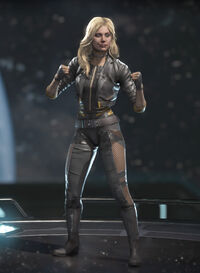 Black Canary is seen wearing leather boots and leather pants over her fishnets; the pants are cut on each side to reveal the fishnets underneath. She wears black gloves and a bomber jacket, as well as a black zip-up leather top underneath. She also wears a studded choker.

To the right is the base skin for Black Canary, Canary's Cry. She is wearing her default gear. The remainder of her costumes can be found on her gallery page.