watch 02:08
'Injustice: Gods Among Us' - Black Adam Trailer
Do you like this video?

Black Adam is a playable character and major antagonist in Injustice: Gods Among Us and Injustice 2. He is classified as a Power User, and uses magical powers derived from the Gods of Ancient Egypt.

Teth-Adam was raised as the son of the legendary Ramesses II. When he reached adulthood, he approached the wizard known as Shazam, where he was given the powers of the Egyptian Gods (the representatives being Shu, Heru, Amon, Zehuti, Aton, and Mehen.) This gives him the ability to harness them upon saying the magic word "SHAZAM!" Since then, Adam lived within his new form to maintain immortality, going on to rule his own country, Kahndaq. Adam has also used his powers for evil, but only to defend his country. To the chagrin of Shazam, he contacted his new apprentices, the Marvel Family (led by Billy Batson as Shazam) to stop Adam's evil ways. This ended up resulting in a lifelong rivalry between the two, spanning multiple years.

Black Adam is a supporter of Superman’s One Earth government because it resembles his own rule. Adam claims that Superman used his rule in Kahndaq as a model for One Earth.

After the fall of the Regime, Black Adam returned to his home defeated and humiliated. Staying hidden from Batman’s watchful eye, Kahndaq has become a safe haven for the Regime’s remnants. There they await the day that together they can restore the Regime's rule upon the world.

Black Adam first appears in the game's opening battling the Justice League alongside several other super-villains. Adam battles Shazam but is easily dominated by both his successor and Hawkgirl tag-teaming him. Shazam manages to daze Black Adam, allowing him to call down his magical lightning bolt, returning Black Adam back into Teth-Adam, just in time for him to be caught under a falling Doomsday.

Adam is safely caught by Green Arrow 's cushion arrow before he falls to his death.

In the parallel dimension, Black Adam has joined with Superman's One Earth Government, claiming Superman based his rule on Black Adams government in Kahndaq. Black Adam first appears alongside the alternate Wonder Woman to confront the duplicates of their Green Lantern, Green Arrow, Aquaman and Diana in the Batcave as they attempt to retrieve a kryptonite based weapon to subdue Superman. Adam tackles the duplicate Wonder Woman when she briefly lets her guard down at the sight of her doppelganger.

Aquaman manages to get Adam in a chokehold with his trident but Adam quickly knocks him out by flying up and slamming Arthur onto the cave's roof. Wonder Woman, Batman and Green Lantern attempt to bind Adam but he unleashes a stream of lightning that knocks the three out, only leaving Green Arrow to face him. Though much more powerful then the mortal Oliver Queen, Ollie had earlier taken a pill supplement that Superman gives his troops for added endurance, allowing Arrow to somehow defeat Adam and let the heroes escape.

Much later, Adam appears alongside Superman and his gathered forces to battle Batman's Insurgency at Stryker's. During the battle, he works with Hawkgirl to attack the duplicate Green Lantern but chooses to chase after Lex Luthor when he reveals his betrayal. Adam is knocked unconscious by one of Luthor's missiles during their chase, and falls onto a nearby sidewalk.

Black Adam next appears in Superman's Fortress of Solitude, proclaiming anarchy cannot be allowed to spread when he learns of the people's insurrection. Adam is called to Superman's side when the Man of Steel declares his intentions to attack Metropolis and Gotham. Adam watches Superman murder Shazam.

Black Adam is next seen attacking Gotham, and is about to crush Aquaman under a car when the duplicate Superman intervenes. Though Clark tries persuade Adam to return to Kahndaq, Black Adam chooses to attack Superman instead, even lobbing cars at him. Despite his claims of equaling Superman's strength, Black Adam is defeated and frozen in place by Clark's freeze breath.

As the ruler of Kahndaq, Black Adam was immune from prosecution when the Regime fell, allowing him to bide his time, rescue Wonder Woman from Themyscira, and train Supergirl, a Kryptonian he found conserved in her space ship, away from the prying eyes of Batman. This isolation also allowed Adam and Wonder Woman to hide Superman's crimes from Supergirl so it would be easier to turn her against his enemies.

As Gorilla Grodd reveals the Society to the world, Adam sees Supergirl returning from an orbital flight and reprimands her, reminding her that the world's ignorance of her would be their greatest asset in rescuing her long-lost cousin, Superman.

Taking advantage of the hysteria of Brainiac's invasion, Black Adam blows a whole into the Red Sun Prison holding the fallen Regime members, floating over the pro-Regime protesters outside the prison. Adam sabotages the prison's generators with his lightning before Blue Beetle and Firestorm confront him in the Power Center and knock him out. He recovers in time to join Wonder Woman, Supergirl, Cyborg, and Damian Wayne in charging Superman's cell. Firestorm activates a nuclear explosion in an attempt to keep the Regime from freeing Superman, but the standoff is defused when Batman arrives to free Superman himself, allying his forces with the Regime, to Adam's surprise.

Black Adam sits between Harley Quinn and the Flash at a meeting between Batman's forces and the Regime loyalists. He remains silent, crosses his arm when Batman orders everyone to avoid killing, stands up first at the meeting's adjournment, and accompanies Superman to his Fortress of Solitude.

As soon as Superman restores his powers in his Fortress, Adam requests to be allowed to return to Kahndaq before Brainiac locates it despite its magical protection. He leaves the room so Superman can talk to Supergirl in private, only to blast her with lightning minutes later to stop her from escaping the Fortress and the Regime. She angrily accuses him of lying to her about the evil of the Regime, which Adam dismisses out of his belief that evil is decided by those with power.

Supergirl defeats Black Adam and then her cousin, but further conflict is interrupted by the acceleration of Brainiac's attacks on Earth. Scared for his homeland, Black Adam speaks urgently about the need to return to Kahndaq.

Upon Superman's supposed death at Brainiac's hands, Black Adam flies to Metropolis alongside Wonder Woman to meet with Batman and the other heroes. With all scientific options exhausted. Adam forwards that a magical solution may be needed to solve the problem of Brainiac's invincibility. With help from Aquaman, Adam formulates a plan to channel the Rock of Eternity's magic into the Trident of Poseidon and strike down Brainiac's shields, opening him up to normal attack.

Within an hour, Aquaman and Adam arrive in Kahndaq to open the gateway to the Rock of Eternity through a powerful release of magical energy, alerting Brainiac to Kahndaq's location. By the time the gate is fully open, Brainiac has already sent two brainwashed heroes (Green Arrow and Black Canary), a horde of gorillas, and a spaceship to stop the two monarchs and devastate Kahndaq. The monarchs subdue Brainiac's forces and are surprised to reunite with Blue Beetle, who is revealed to be a puppet of Gorilla Grodd when he attacks Adam the second he starts channeling the Rock of Eternity's magics. The kings beat Beetle and kill Gorilla Grodd.

Black Adam, with little time to spare, sits in front of the Rock of Eternity and surrounds himself with electrical magic, before invoking the magic of "Shazam" and shouting a wave of magical lightning into Aquaman's trident. With the King of Atlantis's guidance, the attack hits Brainiac's flagship and leaves him vulnerable for the first time.

Alongside Aquaman, Black Adam meets Superman and Batman aboard Brainiac's flagship as the heroes debate whether to kill Brainiac or leave him to return the cities of Earth. As Batman and Superman begin to fight, Adam grabs Supergirl from behind and flies her away from her cousin before she can help Green Lantern in his battle with him. Adam smiles as he pumps two streams of electricity into Supergirl, before turning his hand to fire one of the streams into Batman and tackling the mortal out of the ship. He dangles Batman above Gotham City before letting him drop to the concrete. Unwilling to surrender, Adam engages in a losing battle with Batman and is defeated, making him vulnerable to prosecution in America.

Black Adam is one of the most powerful characters seen in Injustice: Gods Among Us. Like Shazam, Adam's powers are derived from ancient gods, though where as Shazam is empowered by Greek/Roman deities, Black Adam's powers are given from the Egyptian gods. Black Adam possesses super human strength, speed, stamina, and invulnerability on par with Superman himself, as well as the power of flight, and significant skill in magical manipulation, as Adam is able to use his magic lightning in several different ways than Billy can, shaping it into streams of lightning he can conjure from his hands, orbs to protect himself or throw, he can even shape it into a cage around himself that he can transform into a larger bolt.

Though incredibly powerful, able to defeat lesser metahumans with relative ease, Adam has been overpowered by Superman single-handedly and even held in place temporarily by Superman, Wonder Woman, and Shazam. His only true weakness is if he forced to revert to human form after uttering his magic word, "Shazam", and struck by the divine lightning that can depower him. Adam does not have to say the word himself necessarily, as Shazam was shown able to call down the lightning and dodge the bolt to depower Adam. Wonder Woman has also been shown able to use her Lasso of Truth to compel Adam to invoke the word, albeit against his will.

The defeat of Superman taught Black Adam one thing: most of Earth's denizens were too weak to adopt Kahndaq's visionary form of government. He returned to his homeland with a new plan. Combining their energies, Black Adam and his empress, Isis, created a mystical barrier around Kahndaq. There they reigned in peace, their country an oasis in the wasteland of human civilization--a true oasis once Black Adam had destroyed all other life on Earth.

I returned to find Kahndaq devastated from Brainiac's attack. My beloved queen was dead. I brought her broken body to the Lazarus Pits, intent on her resurrection. But my entry was barred by Ra's al Ghul. He offered a trade, access to the Pits in exchange for my aid in bringing him to power. Ra's admired Superman's regime, but felt it should have gone further. While I have no love for Ra's, I accepted his terms. I will pay any price to again feel the embrace of my dearest wife.

He is now bald, and his costume has golden accents on the collar and waist. He wears a cape with his gold lightning bolt running down it. He has new gauntlets and golden armbands on his biceps, serpent designed greaves, and a dagger sheathed on his chest. 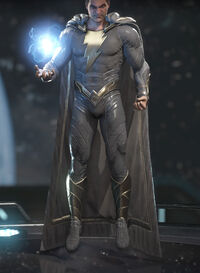 To the right is the base skin for Black Adam, Teth-Adam. He is wearing his default gear. The remainder of his costumes can be found on his gallery page.

Retrieved from "https://injustice.fandom.com/wiki/Black_Adam?oldid=147111"
Community content is available under CC-BY-SA unless otherwise noted.