Injustice:Gods Among Us Wiki
Register
Don't have an account?
Sign In
Advertisement
in: Power Users, Characters, Villains,
and 12 more

He is officially classified as a Power User. He is a member of the Society, former member of the Regime and an enemy of Batman and the Insurgency.

Eduardo Dorrance was born in the Central American country Santa Prisca, where he was transferred to one of its most notorious prisons to carry on the sentence of his recently escaped father, revolutionary Sir Edmund Dorrance (AKA “King Snake”). As he would grow in the given environment, Dorrance would become one of the most feared inmates. Along with being a fearsome brute with his strength, he also studied a lot, reading any book he can get. However, Dorrance’s physical prowess attracted the warden's attention, who put him in an experiment on testing a steroid called "Venom." As such, Dorrance broke out with a handful of the drug and ventured to Gotham City, where he would take on the codename “Bane” and become one of many infamous rivals of Batman, even being able to best him on different occasions.

Growing up in Santa Prisca Peña Duro prison, the intellectually gifted Bane was educated in the ways of crime. He was subjected to experiments with the drug Venom, which gave him super strength.

Sent to the Phantom Zone by Superman for ‘re-education’, Bane was one of the first villains to be accepted into the ranks of the One Earth regime. His intellect and brute strength serve Superman well.

After Superman’s defeat, Bane was betrayed by the Regime and relentlessly pursued by Batman. Having already spent most of his life in prison, he is determined to take revenge against his former Regime masters and turn Gotham into a city where his rule is law.

Bane is first seen working alongside Catwoman and Solomon Grundy for Lex Luthor in the original Earth. He fights and overpowers Nightwing on the Justice League Watchtower before being defeated by Batman.

In the alternate Earth, Bane is a re-educated enforcer for Superman's Regime. He is first seen taking part in the assault on the Insurgency base. Wonder Woman expresses surprise that Superman allowed Bane to fight for him. Bane claims Superman spared him because of his particular skills and similar views on criminal justice. He fires at Wonder Woman with a powerful assault rifle, which proves useless against her bracers. Enraged, he battles Wonder Woman hand to hand. Wonder Woman is teleported to Themyscira via Ares before she can finish Bane off. Having been weakened, Bane is then defeated by the two Batmen.

Near the end of the game, he is arrested along with the other enforcers of the Regime.

He escapes imprisonment and joins Grodd's Society. He was among the Society members onstage during Gorilla Grodd's speech. He, Grodd, and several members of the Society discuss their plan before Grodd sends most of the members away, leaving him, Grodd, and Catwoman. However, before the three can do anything else, they are ambushed by Black Canary and Green Arrow. The three rush towards the duo before being pushed back Black Canary's cry. He, along with Catwoman, then fight Green Arrow and Black Canary. Depending on whoever the player chose to battle Catwoman, the latter will be knocked back by Bane. He is eventually defeated when one of them snipes his venom tubes, and Canary knocks him out with a kick to the face.

During the attack in Atlantis, he recognizes Green Lantern and proceeds to battle him but is defeated. Green Lantern is then consumed by the red energy, who swings a hammer construct at a weakened Bane, knocking him out.

He and Deadshot later ambush Catwoman and Cyborg when they infiltrate the Bat Cave to regain access to Brother Eye. He expresses little surprise that Catwoman turned on the Society, even claiming that he told Grodd about her true nature but was ignored. He then explains that he joined the Society to gain control of the Batcave and soon would control Gotham. Either Cyborg or Catwoman then battles him, defeating him.

Like most other Society members, he disbands when they realize Brainiac wishes to destroy the Earth rather than let them conquer it.

Bane possesses a keen intellect and a body trained to physical perfection in the harsh environment of the Peña Duro prison. After being exposed to the experimental drug Venom, Bane's physical strength was increased to superhuman levels, fluctuating depending on how much has pumped into his system. In battle, Bane uses his great strength and body size to his advantage, employing his surprising speed to overwhelm his foe with powerful strikes. His strength and size contribute to his formidable durability, as Bane can take almost as much as he dishes out. While able to overpower lesser opponents, Bane's strength and speed only aid him against mortal foes like his arch-enemy Batman, with Bane's own abilities being nothing special against the likes of Superman and other metahumans of renowned power. Bane's addiction to Venom is also a major weakness as much as it is a strength; if cut off, he will go into withdrawal, leaving him weakened and debilitated. As seen when fighting Wonder Woman, he also has experience with firearms, as he is seen firing an assault rifle at the latter.

Superman had been a fool to believe Bane would willingly accept a subordinate role in the One Earth Government. With the high councilor out of the way, true leadership could begin. Though they lacked intelligence, Bane found Sinestro and Black Adam inspiring examples of ruthless absolute authority. They reciprocated his regards for their talents. The three former villains regained control of the planet, and formed a ruling triad that would be uninterrupted, until the next phase of Bane's plan.

Who would have ever imagined a sickly boy born in a prison would survive to become humanity's savior? I did. And now the world is mine. So I say to all prisoners... Rise! Come out! Kill your wardens. Make slaves of your guards. Teach them the meaning of despair! We have no more prisons, no police, no Regime left to fight...

No one left to fight... Any worthy opponent has already... fallen. Dios mío. Perhaps victory can be a prison. A possibility I never imagined...

Bane wears brown cargo pants and a sleeveless black muscle shirt that is tucked in his pants. His belt has a fairly large buckle. He wears black gloves and black boots. He also wears a black and white Lucha Libre mask, which can appear as a skull with red eyes if looked at closely enough. Bane has venom tubes running from his back to his arms, chest, and inner thighs. He also has pieces of metal protecting his forearms, feet, and knees, with notable spikes.

Bane wears a ripped orange prison uniform with his venom injection system on his bare chest. He also has metal protection on his arms and legs. 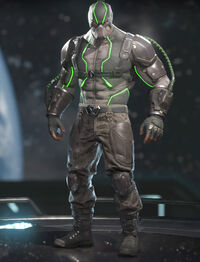 Bane's costume has greatly changed in the Injustice 2 timeline. He wears a black-frame and gray-colored biker suit-like armor, with green line details around the armor. He also keeps his black luchador-like mask, which now dons a metal faceplate covering half his face. Bane also has his Venom apparatus on each of his wrists, with the tube now more mechanical and glowing green, are attached from his wrists and at the back of his head connected with a metal plate behind his back (possible the storage container of his Venom). Bane also wears dark grey cargo pants with studded knee pads and black boots.

To the right is the base skin for Bane, Knightbreaker. He is wearing his default gear. The remainder of his costumes can be found on his gallery page.