Red Lantern Atrocitus seeks revenge against all members of the Green Lantern Corps for their murderous oppression of his homeworld. His hate blazes a path across the galaxy leading him to Earth. Sensing an opportunity on the post Regime planet, Atrocitus focuses on bolstering the Red Lanterns ranks by stoking the flames of rage. In his quest for vengeance, he killed Abin Sur and set up the events leading to the Blackest Night.

Atrocitus appears in the background of the Metropolis (Rooftop) Stage, fighting Kilowog in the sky.

In one of the S.T.A.R. Labs missions, Atrocitus aids Sinestro into taking over Earth and can be used for an attack when needed.

Though not a direct participant of the battle with the Regime. Atrocitus stated that he observed Hal's actions as a Yellow Lantern and taking note of all the innocents he slaughtered.

After Green Lantern defeats Bane, Atrocitus and Dex-Starr make their presence known, with Aquaman expressing his surprise of the existence of Red Lanterns and Hal explains their nature and volunteers to fight the Red Lantern "ring to ring."

As the two circle each other, Atrocitus confirms his interference in Hal's mind, and telling him of his time as Yellow Lantern causing his victims to demand vengeance, and how all his crimes are not absolved even as a Green Lantern. Atrocitus states Dex-Starr's intention of ripping Hal's heart out, but states his own observation of a spark of rage within Hal, and vomits on him. As Green Lantern begins to suffer from the surge of anger, Atrocitus presents the writhing Hal with a Red Lantern Ring, and asks him if he can forgive himself. As the ring moves closer, Atrocitus urges Hal to submit to his rage and become a Red Lantern, but is blasted back as Green Lantern regains control.

The two Lanterns fight, and Atrocitus is defeated. He leaves, but tells Hal of his world burning and swears that Hal will beg for vengeance in the future. Atrocitus is not seen after this point in the story, but he continues to influence Hal indirectly.

The Butcher: Atrocitus recites the Red Lantern Oath as he impales his opponent in the gut with a blade and punches them against a rock, then summons the Butcher, which charges at the opponent, destroying the rock and knocking them onto the floor. Atrocitus then spews fire onto the opponent. (IJ2)

My punishment of Brainiac's crimes had unintended consequences. His death disabled his ship. Billions of collected souls perished. I did not know they could be restored. Their deaths unleashed such rage, my Red Lanterns were overwhelmed. They drove me from Ysmault. They would have killed me, if not for Proselyte. The emotional entity offered me compassion, not rage, in the face of my grave error. I now understand the emotional spectrum requires balance. My Red Lanterns' rage must punish the worst offenders. But it cannot blindly consume those who deserve compassion. 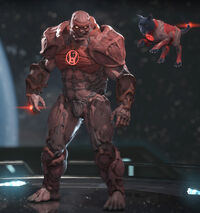 Atrocitus has red, rock-like skin with glowing yellow eyes and has the Red Lantern logo on his chest. To the right is the base skin for Atrocitus, Red Lantern. He is wearing his default gear. The remainder of his costumes can be found on his gallery page.

Retrieved from "https://injustice.fandom.com/wiki/Atrocitus?oldid=145633"
Community content is available under CC-BY-SA unless otherwise noted.